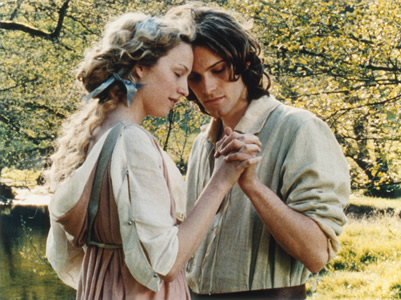 Ingmar Bergman and Michelangelo Antonioni may have just passed away at ages 89 and 94, respectively, but neither had been making theatrical features for a long time. Meanwhile, Eric Rohmer, at age 87, is still going strong. The Romance of Astrée and Céladon is his third feature since the turn of the millennium and his fourth consecutive film selected for the New York Film Festival.

Rohmer is best known for his works about negotiating or navigating contemporary romantic relationships like Claire’s Knee and Autumn Tale, but every once in a while, he comes up with an atypical period piece like The Marquise of O, Perceval and The Lady and the Duke. Astrée and Céladon falls into this latter category and may very well be the best of them.

About two shepherds in 5th century Gaul, it starts off with a Romeo and Juliet premise. Astrée (Stéphanie de Crayencour) and Céladon (Andy Gillet) are in love, but Céladon’s parents hate Astrée’s so Céladon pretends to woo Amynthe (Priscilla Galand). Astrée thinks Céladon is unfaithful and flies into a jealous rage, telling Céladon that she never wants to see him again. Céladon tries to drown himself in the river and winds up washed ashore where he is found by three maidens in white who turn out to be the nymphs Galathée (Véronique Reymond), Léonide (Cécile Cassel), and Sylvie (Rosette Quéré). Enamored of Céladon despite his lowly birth, Galathée, the leader of the nymphs, decides to keep him, holding him captive in her beautiful garden.

Don’t expect Lord of the Rings lavishness here. The set design is as spare as can be, and the costumes look like they were rented out from a renaissance fair. Still, Rohmer thankfully forsakes the digitally imposed backdrops of The Lady and the Duke and takes a page from Eugene Green’s Le Monde vivant, which made no attempt to conceal that it was shot in contemporary times despite its medieval setting. The blatant artificiality, both in Green’s film and here, has a charm of its own. The actors playing our protagonists though certainly look their parts. As Céladon, Andy Gillet, with his bold forehead and prominent chin, looks like he stepped out of a fable, and likewise for Stéphanie de Crayencour with her wiry golden locks and marble skin.

Rohmer indulges in two extended philosophical debates in the film. In the first, Céladon’s brother, Lycidas (Jocelyn Quivrin), debates the irreverent, bohemian bard Hylas (Rodolphe Pauly) on prizing an idealistic soul over the materialistic body. In the other, the Druid Adamas (Serge Renko) tries to make a case for monotheism to Céladon’s polytheistic views. At least the former is pertinent to the themes of the story, but the latter discussion is dull and uselessly antiquated.

At first, Rohmer clearly seems to side with Lycidas’ high ideals, but the story doesn’t bear this out. Once Céladon escapes from Galathée, his explanation as to why he does not return to Astrée is that “Love is mad.” It’s this type of irrational behavior that keeps the story going. Céladon’s idealism in obeying Astrée’s wish to stay away is misguided, and ultimately, Céladon comes off as a bit of a dullard in taking Astrée’s every word so literally independent of circumstance. It is up to others to uncover a way to cheat his stubbornness for the story to find resolution.

(19163)
$20.99 (as of January 21, 2021 - More infoProduct prices and availability are accurate as of the date/time indicated and are subject to change. Any price and availability information displayed on [relevant Amazon Site(s), as applicable] at the time of purchase will apply to the purchase of this product.)
related posts