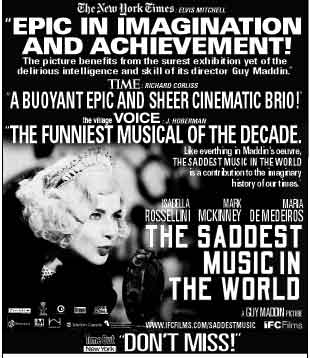 Contrary to its title, The Saddest Music in the World is not a particularly sad film, nor is the varied music used in the film likely to tug at the heartstrings. Writer-director Guy Maddin, the idiosyncratic Canadian auteur, started with a previously unfilmed decade-old screenplay by Kazuo Ishiguro (The Remains of the Day) and reset it from contemporary London to Depression-era Winnipeg. The tone of the film, too, must be presumed to be entirely from the fertile imagination of Mr. Maddin. It’s a unique combination of over-the-top period-film sendup, surrealism, family saga, and politically-charged storytelling that touches on "big" themes, but always with tongue lodged firmly in cheek.

The framework of the plot is a global competition to determine the saddest music in the world, sponsored as a promotional stunt by Lady Port-Huntly (Isabella Rossellini), the Beer Queen of the Prairie, whose fortune has been made in beer at a time when the United States suffers under Prohibition. In a flashback, it is revealed that Lady Port-Huntly was the victim of an automobile accident that required Fyodor (David Fox) to amputate both of her legs. Also in the car was Fyodor’s son Chester Kent (Mark McKinney). Father and son were both romantically involved with Lady Port-Huntly. Now Kent is a down-on-his-luck Broadway impresario who has returned to Winnipeg to represent the United States in the contest. He is accompanied by his paramour, Narcissa (Maria de Medeiros), who insists, "I am not an American; I’m a nymphomaniac!" The remaining member of the family, Roderick (Ross McMillan), Chester’s older brother, will represent Serbia ("the little country that started the big war") in the contest. He’s a cellist who is in deep mourning for a dead son.

The Saddest Music is filmed in grainy black-and-white with some flashbacks in a monochromatic blue and occasional bursts of color footage that have the look of old black-and-white films that have been "colorized." Maddin is evoking the look of silent films as well as their melodramatic style, but he appropriates the style only to stretch it to a near-camp extreme. The film is a virtual catalogue of sources of sadness–the loss of a limb, the loss of a child, the loss of love, the loss of life–which is constantly present as the underpinning of a giddy carnival atmosphere. Chester observes: "Sadness is just happiness turned on its ass."

In the midst of this madness there is also a good deal of not-so-subtle political commentary, with allusions to Canada’s economic interdependence with the United States. Lady Port-Huntly, the Canadian mogul has no legs and when she gets prostheses, they’re made of glass and filled with beer. Fyodor, who represents Canada in the contest, is a sentimental, incompetent drunk. Chester is the perennial American salesman, a vulgar big-talker using money he doesn’t have to co-opt the competition.

But politics are just one more ring in this many-ringed circus. The very nature of Maddin’s flamboyantly artificial style here distances the viewer emotionally; no one will really care about these farcical characters as if they were real people. At the same time The Saddest Music virtually gushes with an overflow of ideas and images and razzle-dazzle, enough to sustain interest throughout and provide some thought for later on, too.