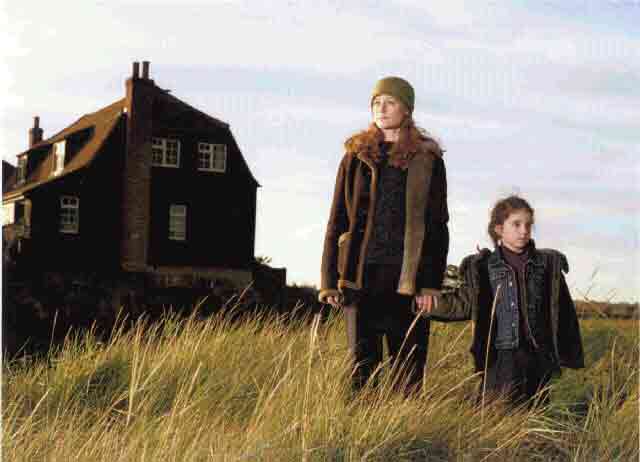 The Safe House (not to be confused with the 1999 movie, Safe House, with Patrick Stewart) could be the result of a high tea conversation between Alfred Hitchcock and Dame Agatha Christie, with its blend of whodunit mystery and atmospheric tension. But the determining phrase here is &#147;high tea,&#148; where the conversation is hastily concluded so as not to intrude into suppertime and spoil the main course. The movie has the same feel. It has an intriguing premise, fine plotting, and a menacing tone but somewhere towards the middle, the protagonists embark on a race towards a fairly predictable finish line; tea has been served, and it&#146;s time to go home.

One fine morning, the housekeeper comes home to find murder in the family; the father and mother have been brutally killed, and the daughter, Finn (Kelly Reilly, Maybe Baby, Last Orders) has been gagged and locked up in the basement. The police suspect that the killer may harm the daughter, and bundle her off to the home of a psychiatrist, Dr. Sam Graham (Geraldine Somerville, Harry Potter and the Sorcerer&#146;s Stone, Cracker) who is also a single mother. The choice of the psychiatrist is apt, since Finn is so traumatized by the murders that she is more or less catatonic.

Graham treats depression arising from extreme distress, and this case seems right up her alley. But she is reluctant; she senses that the police are using her to pump information out of the hapless girl. Slowly, Graham and Finn grow close and Graham&#146;s little girl, Elsie (Emily and Laura-Jane Keston), accepts Finn as her confidante.

Graham&#146;s home is in the midst of the Essex marshlands, and is as desolate as Wuthering Heights. Just why the police tuck Finn away in such a secluded place is a mystery in itself. The seclusion offers privacy and anonymity, but also makes it easier for itinerant killers to operate. The menace of the empty marshlands is the most striking image of the movie. The television set, despite being incapable of conveying enduring senses of time and place, is no barrier to the dread envisioned by the surroundings in this narrative.

The relationship between Graham and Finn takes several interesting turns. Finn develops an almost obsessive interest in Graham, much to the psychiatrist&#146;s discomfort in breaching the doctor-patient divide. But Graham later discovers that Finn has designs on Graham&#146;s boyfriend, Danny (Sean Gleeson, The Woman in White, EastEnders) and on Elsie as well. While Somerville successfully plays the good-looking working mother with an occasional boyfriend, her role is eventually eclipsed by an exuberant performance by the sensuous Reilly. With her pouting lips and sorrowful eyes, Reilly&#146;s character is a vamp in distress, leaving the viewer to muse about what lies behind her guileless facade.

Until this point, the film plays true to form as a murder mystery. But just when one is rubbing the palms together and settling down to, as Hercule Poirot would call it, &#147;exercising the grey cells,&#148; the characters shift into high gear, and take a tense drama into pulp-fiction territory. A few dead bodies later, the viewer all but knows the outcome of the movie. &#147;Oh, what a shame!&#148; Agatha would say.

The straight-laced script is somewhat redeemed by Somerville and Reilly imbuing their characters with psychological depth. Somerville&#146;s character is simultaneously contending with her own safety and that of her child, problems with her boyfriend, and solving the mystery of the killers&#146; identity. Reilly, as the girl with a violent past and an uncertain future, plays her role with equal dollops of charm, dread, and cunning.

Production values are excellent; the outdoor day and night shots of the marshlands and of the quaint town nearby are simultaneously breathtakingly beautiful and darkly perilous. The indoor shots have made clever use of shadow and light, making the surroundings both cozy and threatening. In the more fearful moments at Dr. Graham&#146;s &#147;safe house,&#148; the inhabitants&#146; faces are in the light while the rest of their bodies are in the shadows, enhancing the psychological rather than the physical aspects of the narration. Hitchcock would be happy; Agatha would be a trifle miffed, I suspect.

(41289)
$9.98 (as of January 26, 2021 - More infoProduct prices and availability are accurate as of the date/time indicated and are subject to change. Any price and availability information displayed on [relevant Amazon Site(s), as applicable] at the time of purchase will apply to the purchase of this product.)

(18287)
$2.85 (as of January 26, 2021 - More infoProduct prices and availability are accurate as of the date/time indicated and are subject to change. Any price and availability information displayed on [relevant Amazon Site(s), as applicable] at the time of purchase will apply to the purchase of this product.)

(27676)
$0.75 (as of January 26, 2021 - More infoProduct prices and availability are accurate as of the date/time indicated and are subject to change. Any price and availability information displayed on [relevant Amazon Site(s), as applicable] at the time of purchase will apply to the purchase of this product.)
related posts