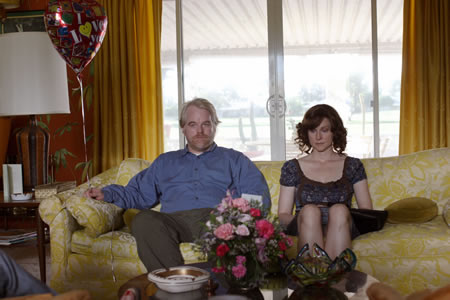 Written and directed by Tamara Jenkins

“The Savages,” writer/director Tamara Jenkins’s second film, is easily the best comedy of the year. It’s refreshing to see some serious comedic talent coming from someone who also happens to be a woman. In a man’s world like Hollywood, you can count on one hand the number of women directors who have had major critical and popular successes, and Jenkins is a welcome addition. She has made a very, very funny film, a crisply intelligent and mostly empathetic look at dysfunctional family relationships from a woman’s perspective. She has also given us a rich and brilliantly written female character in Wendy Savage, and an in-depth look at an otherwise mostly ignored facet of family dynamics—the relationship between brother and sister.

The film is buoyed by two of the greatest actors working today, Laura Linney (at her very best) and Philip Seymour Hoffman. They play Jon and Wendy Savage, a brother and sister who suddenly have to deal with each other as they come together to deal with their old and dementia-ridden father (Philip Bosco, who adds a wonderful flavor to the role of the curmudgeonly asshole who still has sparks of mental acuity). After the two siblings find out he’s been smearing his own feces on his bathroom wall (granted, he was provoked by his home-care worker), they realize it’s time to put dear old Dad in a nursing home, and so begins their adventures as caregivers.

Like Nora Ephron, Jenkins has an amazing gift for writing the kind of dry, unsentimental comedy that taps into the less savory aspects of human behavior—those niggling embarrassments like jealousy, selfishness, vanity, envy and self-doubt. She taps into what is universally human; her characters are people we feel like we already know, who might be relatives of our own, or even ourselves.

In “The Savages,” Jenkins focuses on the present day post-boomer generation who are passing into their forties, a stage of life when many of us finally face just how screwed up we are—when issues like unhealthy relationships, parental disablement (or worse, disinterest, whether caused by dementia or already blatantly obvious from infancy), sibling rivalry, and stalled or failed careers, rear their ugly heads like the monsters Opus sees when he opens his bedroom closet.

Unlike Ephron, whose world is a privileged one (an urbane lifestyle, luxurious apartments and glamorous professions are the norm in Ephron’s films), Jenkins shows us a particular subset of the educated middle class where money is always an issue, where one’s status in the professional world is as thematically important as one’s status in a relationship. In “The Savages,” the careers of both adult children are an integral part of the story. Jon Savage is a college professor specializing in Brechtian theater, and his sister Wendy is a struggling playwright who makes her living doing temp jobs, and fuels her fragile writer’s ego by constantly applying for grant money.

Philip Seymour Hoffman is perfect as the older brother who has spent a lifetime making his little sister feel inferior, and his role in “The Savages” is receiving justifiable accolades. If I were to guess, I’d say that the character of Jon Savage is about as close to the real Hoffman as we could possibly get, and this portrayal is not that much of a stretch for him. It may be just another bit of acting genius, but Hoffman just feels like he’s playing himself as the brooding drama teacher who hides behind his books and his love of theater, who is more comfortable analyzing life than living it.

Laura Linney, on the other hand, has never been as funny and relaxed as she is in the role of Wendy Savage. Linney often looks pinched and stiff in her dramatic roles, like she’s trying too hard, or else she looks like she’s trying to keep a smirk off her face. A bit like Meryl Streep, she’s an amazing technician whose talent always seems to remind us that she is ACTING. In “The Savages,” however, Linney inhabits the role of Wendy Savage with an almost gleeful abandon. She is absolutely lovable playing a neurotic, paranoid, insecure and lonely woman who has never dared love anyone, or even dared to be loved, not even by herself, but who nonetheless shows all the signs of really wanting to. When she finally does find a way, tentatively, at the movie’s end, it’s a cause for rejoicing. In fact, “The Savages” has one of the best happy endings I’ve seen in a long time, in part because it is so sweet without being saccharine, subtle without being ambiguous.

As much as I loved “The Savages,” I did have a gnawing twinge of wanting more when I watched it. Tamara Jenkins has such an eye and ear for comedy that she goes for the laugh instead of exploring deeper layers of dramatic tension. It’s not that she ignores the tension altogether. In fact, she often allows the drama to seep through, acknowledges it with a few seconds of silence, and then moves on, often to a shot that is in such comedic contrast to the drama we were privileged with a peek that it deflates the previous scene of what pathos it did have. This happens a lot—this is a comedy after all, so the drama is necessarily downplayed—but sometimes it feels forced, and we see the wires of manipulation. After Dad is finally transported to his nursing home and they have settled him in his bed—a moment of transition that reeks of sadness—Wendy and Jon look at each other in silence, and then the film immediately cuts to them walking stoically down a hallway festooned with Christmas decorations, with cheerful holiday music blaring in the background. Whatever pathos was there is immediately obliterated. It’s a funny cut, but the laugh comes at a cost.

Even so, the reticence to communicate deeper feelings is typical of American comedy in general. At least Jenkins provided us with a quasi deus ex machina, in the form of an immigrant nursing home worker (soulfully played by Gbenga Akinnagbe) who helps Wendy understand the feelings her brother can only react to with an analyst’s poker face, and to grow up a little as a result. It’s a writer’s prerogative to use someone in a minor role to help a character evolve, and to my mind, a typically American one. A European comedy would have had the brother and sister finally duke it out, spilling their guts in a free-for-all of wonderfully funny abusive dialogue. But then that’s not our style over here. We are basically a bunch of repressed Puritans, and sometimes it takes the inner wisdom of a Nigerian pothead to show us the way. Even Wendy isn’t oblivious to the irony of this stranger’s significance in moving her to an epiphany, and the story to its conclusion.

Now that I think about it, that’s kind of funny, in a goofy, offbeat American way. Maybe Tamara Jenkins is not just being American, but commenting on being American. This movie may be even better than I think it is.