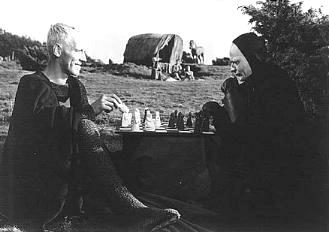 A knight and his squire return from the Crusades to their native Sweden which is ravaged by the plague. The knight encounters Death, but wins a reprieve by challenging the reaper to a game of chess. Thus Ingmar Bergman begins The Seventh Seal, a film that is so densely packed with both visual and verbal images that it is a cinematic equivalent of poetry.

Bergman explores here issues of life and death and faith. At the same time he sustains our interest with a good story, strong narrative flow, and an infallible sense of theatrical timing. He knows just when to interrupt a dialogue of despair with a scene of comic relief, when to inject into a pastoral idyll an ominous foreboding. There is one stunning image after another – a hawk floating in a cloud filled sky, two horses standing in the surf at ocean side, a vision of the virgin and child, a procession of flagellants.

Standing apart from the people around him, their minds filled with both religion and superstition, their lives awash with angels, devils, ghosts, and trolls, our knight articulates the more sophisticated questions. "I want knowledge, not faith," he says, but God remains silent. "No one can live in the face of death, knowing that all is nothingness…Faith is a torment. It is like loving someone who is out there in the darkness, but never appears, no matter how loudly you call."

But, too, Bergman reminds us of life’s pleasures: bawdy sex play, a bowl of freshly picked strawberries, the fun of theater (here in the form of a commedia del arte troupe of players), the appealing innocence of a child, the loving cohesiveness of a family. He accomplishes so much in an incredibly tight hour and a half, without a wasted frame or a moment of excess.

Fine performances by the entire cast are highlighted by Max Von Sydow as the knight and the luminous Bibi Andersson as Mia, the actress/mother figure.

This is a movie that is intellectual and accessible at the same time, one that rewards multiple viewings. Each time CV has seen it there has been a new insight, a moment recast, an added level of understanding. That is the richness of poetry on film in this seminal work.