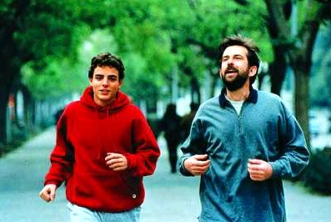 In newcomer Todd Field’s brilliant In the Bedroom, a beloved son is lost prematurely and his parents’ grief leads to an unexpected conclusion, a conclusion that illuminates the depth of their loss. Veteran filmmaker Nanni Moretti (Palombella Rossa, Dear Diary) also explores a family’s grief after the loss of a young son in his new film, The Son’s Room. But Field never once slips into sentimentality or emotionally manipulative strategies, keeping his film rooted in perceptive observation of incident and character, while Moretti’s film seems more like a schematic catalogue of programmed detail, as if a list of the effects of grief were made and the incidents to illustrate them were then filled in. Instead of building character, it makes its points serially and plays like the outline of a B minusterm paper in which the assigned subject is Kubler-Ross.

Giovanni Sermonti (Nanni Moretti) is a successful psychoanalyst, living with his wife, Paula (Laura Morante) and their two teenaged kids, Irene (Jasmine Trinca) and Andrea (Giuseppe Sanfelice). Paula is beautiful and loving, successfully blending a corporate job with perfect motherhood and management of their perfect flat. Irene is beautiful and loving, a star of the girls’ basketball team; Dad helps her with her Latin homework. (Why do thoughts of Ozzie and Harriet irreverently creep in here?)

And son Andrea has the beauty and sweetness of a Rafael angel; he’s so accommodating that his father is concerned that he is not sufficiently competitive. An incident is introduced–Andrea is accused of a minor theft at school–with the presumed purpose of bringing this angel down to earth, but Moretti even manages to cop out on that point. Perfect families like this were thought to exist only on Hollywood studio lots, but evidently the fantasy has traveled afar.

Moretti sets up the Nirvana so that he can then shatter it: Andrea drowns in a diving accident and all are consumed with grief. Moretti shows the receipt of the news, the disbelief, the denial, the guilt, each illustrated with appropriate moments, like something from the psychiatric texts on Giovanni’s bookshelf. He must choose a coffin, the final kisses on the boy’s cold forehead will be delivered, the coffin will be painstakingly soldered and then, screw by screw (in closeup), sealed shut.

Then Moretti starts on Part III of the outline–how the family acts out their grief. Giovanni, the cool and even-mannered therapist, can no longer cope with his patients; he numbly goes on amusement park rides seeking escape or, perhaps, self-punishment; he obsesses over cracks in the family crockery (and that’s repeated until Moretti is sure no one will miss the symbolism). Paula will send Giovanni off to the living room couch to sleep; Irene will throw an uncharacteristic temper tantrum on the basketball court.

Moretti finally drags in an unconvincing deus ex machina in the form of a previously unknown summer girlfriend of Andrea’s in order to find a way for things to move on. But since the family was a blatant and unbelievable setup in the first place, their grief is unlikely to move anyone but the diehard soap opera fan. These people are so beautiful and nice that you want to feel for them, but since they never become real people, it’s impossible to really care. (The near maudlin soundtrack does nothing but emphasize the overall weakness of the film.)

Moretti’s attempts to inject some life into this lifeless company by showing various patients of Giovanni’s on the couch, spilling their problems out to him while he dispassionately listens and murmurs supportive cliches. "We can’t control everything," he tells his obsessive-compulsive client, "Take it as it comes." (It could be a line from Analyze This, but in that film such lines were meant to be funny.) As soon as he says it, only the least discerning viewer will fail to know it will be turned against him.

But then, the form of an outline is the essence of predictability.