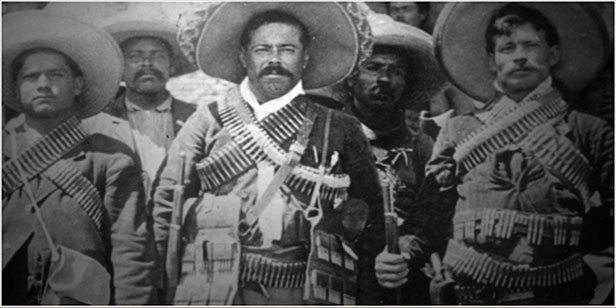 Francisco “Pancho” Villa and his men

The Storm That Swept Mexico

There are two Mexicos, and both are big and sprawling and tormented. Those of us who are vacationers in Mexico can see and feel the visible gap in class differences and racism, and it sharpens our fascination.

The revolutions that rolled through and never changed these two semi-feudal and feuding Mexicos are the subject of this finely edited new two-hour documentary for PBS television stations.

The Storm That Swept Mexico tells the gripping story of the Mexican revolution of 1910, its causes and legacy through World War One, when Mexico briefly tried to ally itself with Germany to win back Arizona and New Mexico. The film will be distributed internationally.

Much of the excitement in the documentary comes from contemporary footage of figures like the darling of Hollywood and hero of Sonora and Chihuahua, Francisco “Pancho” Villa, mirrored in the south by Emiliano Zapata, a far bigger threat to the Mexican presidency.

Villa and Zapata were twin political Robin Hoods of the day, similar in gallantry and flamboyant styles, yet far more dangerous than just cross-border Bonnie and Clydes.

Shot in HD, the movie uses period photographs and film stock from the earliest days of cinema. This film stock has not been seen before and may create a new Zapatista fascination both sides of the border.

Both men were regionalists, Zapata down in Morelos, and Villa near the US border in Durango, Chihuahua and Sonora. Of the two regions, Morelos is by far the richer in indigenos and Indian customs and tradition.

Mexican history is nothing if not complex. The documentary starts with the 1968 student protest just prior to the Olympics. But then it returns to 1876, with Porfirio Diaz, the “benevolent father” or brutal dictator who ruled with an iron fist for decades.

This is, of course, the era that you glimpse in Like Water for Chocolate, with bandilleros galloping through haciendas and raiding women for soldiers. The tormented relationship between America and the United States rapidly intensifies and by 1900, Mexico was an economic colony of the US.

Interviews with top-rank scholars like Professor Alex Saragoza of UC Berkeley explain much that was unclear to non-Mexicans till now about the international context. From the dawn of the 20th century, Mexico continues to erupt, claiming millions of victims, mainly indigenos. President Venustiano Carranza and his appeal to the Germans for help in 1916 was a pivotal move, since it gave way to the Mexican constitution, and belated and minor agrarian reform. But it wasn’t popular with Zapata, who ambushed railroads near the capital, and incited Carranza’s fears.

All this detailed storytelling climaxes in a series of on-camera interviews with some of the surviving rebels, and just in time too (The Storm That Swept Mexico premiered in 2010).

Baldomero Blanquet Moreno was an original Zapatista and the filmmakers interviewed him just before his death, in his nineties. “You will never find another like him,” says Audias Anzuro Soto, another veteran.

We visit Morelos and see where the indigenos, whipped to work quite literally, were finally incited to rise in sheer desperation. “Whipped for 25 centavitos a day, tell me why only 25 cents, that’s why we had the revolution.”

Zapata veteran Gallo Pacheco Valle was over a hundred years old when filmed here. He describes the ambushing of Zapata when he went to meet President Carranza’s military officers to negotiate, and was gunned down in cold blood.

Some eighty years on, centenarian tears flow, and our own eyes well up along with them.

In the simplest language, these ancient soldiers are still able to conjure the fury of the moment and deliver their heartfelt memories at last. Together they explain Mexico’s convulsive past as ably as any of the international scholars. This is one documentary that deserves the widest distribution.