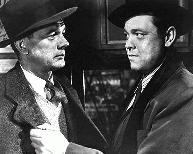 CD: The Third Man Theme and Other Viennese Favorites

The Third Man is a wonderful example of the good that can come from talented people working together in real collaboration. Director Carol Reed, writer Graham Greene, and the cast (especially Orson Welles, in one of the crucial supporting performances in film history) together created a work that hasn&#146;t lost any of its potency in the 50 years since it was made. Held together by Anton Karas&#146; versatile zither theme, the film brims with a melancholy lyricism that&#146;s expressed with perfect pitch in the opening line, "I never knew the old Vienna before the war…"

Holly Martins (Joseph Cotten), an author of cheap Western fictions, steps off a train in bomb-shattered, occupied Vienna just after the end of World War II to meet up with boyhood chum Harry Lime (Welles), who has offered him a job. But Lime has just been killed in a street accident, and Holly&#146;s attempts to find out how it happened only antagonize those who knew Lime best. Lime&#146;s shadowy associates, his lover, Anna (Alida Valli), and especially Calloway (Trevor Howard), the coldly realistic British major who&#146;s been investigating Lime&#146;s black market dealings, all think Holly&#146;s a fool for asking questions; they only want him to go home. Holly gradually realizes that Lime not only was up to no good &#150; he was no good. And Holly winds up finding out even more than that &#150; more than he ever wanted to know, in fact &#150; for Harry Lime is still alive.

The Third Man has no end of quotable dialogue. (It&#146;s some of the most written dialogue this side of The Sweet Smell of Success.) When Calloway refers to September 1939 as "when the business started," it sounds like wry poetry in Howard&#146;s casual, knowing voice. And Holly&#146;s drunken confession to Anna &#150; "Oh, I&#146;m just a scribbler with too much drink in him who falls in love with girls. You." &#150; is memorable for the plaintive, questioning inflection that Cotten puts on the final word. Eventually Holly&#146;s naivete causes the British officer to explode. "This isn&#146;t Santa Fe, I&#146;m not a sheriff, and you aren&#146;t a cowboy," Calloway fumes at him before adding the supreme insult: "I don&#146;t want to investigate any more murders, and you were born to be murdered."

But it was Welles, not Greene, who contributed the movie&#146;s most famous bit of dialogue, the "cuckoo clock" speech, and that is as it should be. Although Welles appears in the film for less than fifteen minutes, he manages to dominate one&#146;s memories about the movie; The Third Man just wouldn&#146;t be the same without him. From the zoom-in on Harry&#146;s face the first time we see him (the twinkle in his eye communicates the seductive charge we get from dangerous friends and dangerous movie stars alike) to the pragmatic nod of his head at the film&#146;s end, Welles emits a laser-like concentration and purity. Any actor worth his salt could have played Charles Foster Kane, but only one man was born to play Harry Lime.

The Third Man is visually alive in a way that few motion pictures are. The movie is smitten with the symbols and texture of decay, with the craters and mountains of rubble that crosshatched Vienna after the war, with steam and smoke and socket-like windows, with ink-black leaf-strewn cobblestone streets, and with the swaybacked postures and cracking nerves of used-up and beaten people. Its physically crippled, morally fractured universe is mirrored in a dizzying array of expressionistic angles, subjective perspectives, and dramatic compositions that fill every corner of the screen. And it&#146;s rife with ingenious flourishes that brush up against its polarized motifs of innocence and corruption, whether in the form of a kitten batting with its paw at Harry Lime&#146;s shoelaces or a melon-headed little boy leading a lynch mob after its quarry. The climax of the picture &#150; the desperate manhunt for Lime through Vienna&#146;s labyrinthine sewer system &#150; is a gem that&#146;s been cut to its sharpest edges. Even the expository shots in the sequence are dazzlers, like the one of some parka-clad soldiers throwing open a manhole cover just as the trolley-pole of a passing streetcar rains down a shower of sparks behind them.

But the film is just as effective in its quieter moments, as when Holly, finally convinced of his friend&#146;s guilt, falls back in his chair and asks disconsolately, "How could he have done it?" ("Seventy pounds a tube," Calloway murmurs by way of reply.) And the agonizingly sustained shot that closes the film, in which the emotional barriers that separate Holly and Anna are pulled into the sharpest focus without a single word passing between them, is one of the immaculate endings of all time.

The Third Man resists being thought of as art despite all of its artfulness. The cruelly difficult questions that Lime puts to Holly at the top of their Ferris wheel ride &#150; "Would you really feel any pity if one of those dots stopped moving forever? If I said you could have twenty thousand pounds for every dot that stops, would you really, old man, tell me to keep my money without hesitation? Or would you calculate how many dots you could afford to spare?" &#150; are never answered with the conviction or imagination that they deserve. (Greene had a knack for creating characters whose ethics were more complicated than his own.) And certain plot elements owe too much to early Hitchcock for the film to be considered a true original: the sequence in which Holly is forced to deliver an impromptu speech is entertaining as all hell, but it&#146;s also lifted from The 39 Steps.

But whether the movie is art or high-toned pulp, Reed and Greene must have known what they were doing because they did it so effectively. Even after 50 years, The Third Man remains one of the most robust and intelligent thrillers ever made, an incredibly effective mood piece, and a model of Old School craftsmanship and polish. On those terms it may never be bettered.