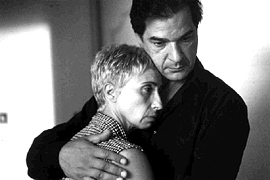 The Town is Quiet opens with a long sweeping pan across the cityscape of Marseille as seen from off its Mediterranean shore. In this instant geography lesson, director Robert Guediguian shows the industrial port, the Romanesque-Byzantine domes of the 19th century "La Major" Cathedral, the fishing port, and the older part of the city, with featureless modern high-rises scattered like lost, oversized stalagmites in the background. It’s a fine beginning for an ambitious film that seeks, in the style of Robert Altman, to weave multiple intersecting storylines about the people of the city and, in doing so, commenting on the textures and quality of lives there.

But Guediguian cuts abruptly fromthe the macrocosm of the opening shot to the microcosm of the individual lives and the transition is awkward and abrupt–it gives the feeling of bad editing or a suspicion of unfortunate cutting from a longer version, like something is missing. That feeling occurs repeatedly in the film which includes some brief scenes with unexplained context and characters seen neither before nor again, about whom nothing is known. It’s disconcerting and it’s a shame, really, because the parts of the film that do work are so well realized.

The most fully developed character is Michele (Ariane Ascaride), who works nights in the port’s fish market in a hard laboring job, then rides her motorbike home where she provides most of the care for her illegitimate infant granddaughter. Her husband is a drunk on the dole and her daughter, Fiona, is a junky, turning tricks to pay for her drug habit. Michele tries to help Fiona, but, unable to bear her daughter’s misery, instead gets roped into preparing her fixes, even while she is warming a bottle for the baby.

Michele ends up going to Gerard (Gerard Meylan), an old beau, for assistance in getting heroin for her daughter. Gerard owns a bar and hires out for political assassinations on the side. He’s an intriguing character, but not as fully developed as is warranted by the pivotal roles he plays in plot developments.

The best realized character besides Michele is Paul (Jean-Pierre Darroussin), a one-time dockworker who has gone deeply into debt to buy a taxi and a permit to operate it. Still going home to his parents for dinner every Sunday (very much the French tradition), Paul lies to them about his life to make them happy–and perhaps to indulge some wish fulfillment of his own. Then there is an upscale married couple in a shaky relationship; he’s a jaded liberal politician, she teaches music to the mentally challenged. ("You disguise your hunger for power as a passion for good causes," she tells him.)

These lives are explored in varying degrees of detail as pieces of the social fabric and political conditions of the city are observed–the once powerful unions have veered to the right, now nationalistic, anti-immigration, protectionist.The economic base is shifting from industrial towards tourism and high-tech, leaving behind a large laboring class that doesn’t fit into the new economics. Racism is rampant, violence is commonplace. A pall of anomie accumulates, contradicting the blue of the Mediterranean skies, pointing up the irony in the film’s title.

So much of The Town is Quiet is so good that its shortcomings become annoyingly frustrating; it’s a film worth re-release in a less brutally cut version. Guediguian, whose earlier Marius et Jeannette is a fine and generally overlooked film, knows his way around the human heart.