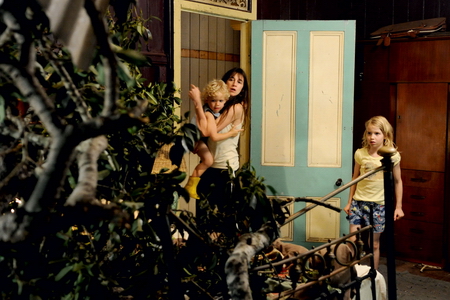 Judging from the vast Australian outback location of “The Tree,” one can foresee that this film will have themes equally as immense. “The Tree” tackles difficult issues of death, mourning, rebirth and the overwhelming power of nature. The film succeeds, highlighted by wonderful acting, skillful cinematography, the barren, almost eerie location and the mysterious interaction between the fig tree and its family.

Dawn (acted by talented Charlotte Gainsbourg of “Antichrist,” “I’m Not There”) lives in a ramshackle house with her truck driver husband and four children. The huge round Moreton Bay fig tree towering above their dilapidated home is as rough, unrelenting yet compelling as the limitless flat terrain.

Too hastily after the film’s opening, Dawn’s husband has a lethal heart attack, and for the rest of the film, we watch the family cope with this tragedy. At first, Dawn is so grief-stricken that she is unable get out of bed, no less take care of herself and her children.

Dawn’s eight-year-old daughter, Simone (wonderful newcomer, Morgana Davies) cannot accept her father’s death. She seeks solace in the arms of the fig tree and begins to believe that her father is whispering to her through the fig’s rustling leaves. Simone’s adorable face belies a strong-willed personality; she refuses to be dissuaded about the tree, or to accept the finality of death.

As Dawn begins to heal, she also finds that sitting in the tree brings comfort. Her sons follow suit. The tree becomes for them a place to be solitary, to seek consolation and to consider their lives. Drought and wind lends the tree a ominous atmosphere that imbues the film with foreshadowing.

The drought causes the tree’s already over-sized roots to search for water under Dawn’s house and the neighbors’ property. When the roots cause plumbing problems, Dawn drives into town to hire someone to fix the problem. She walks into a plumbing supply store owned by handsome George Elrick (Marton Csokas, “Alice in Wonderland,” “The Bourne Supremacy”).

Meeting cute, George thinks that Dawn is answering his ad for part time help. Dawn ultimately takes the job and enters into a life-affirming romantic involvement with him. Her children, with Simone leading the pack, can’t abide George further complicating the family’s fragile existence. Dawn, opting for her family’s unity, calls off the relationship.

Ultimately, in a shocking scene, a horrific tornado transforms the tree, the house and the family forever. Through the metaphor of the tree in its desolate landscape, we see nature fostering resilience and leading the family out of sorrow.

Featured as the Closing Night selection of Cannes 2010, “The Tree” is far from Hollywood’s formulaic movies. Not merely plot-driven, this starkly beautiful film creates a fascinating view of life, real and imagined.