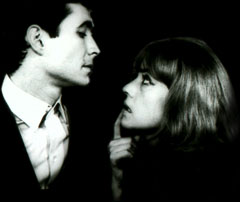 Even in his less successful movies – and The Trial must be counted among those – Orson Welles worked at the leading edge of film creativity, projecting his singular vision to the screen in uniquely filmic terms. Welles had an unsurpassed command of the tools of filmmaking. That, combined with a powerful, if melodramatic, imagination translated into some of the enduring masterpieces of movie history.

Given Welles’ partiality to grand themes and sweeping drama, his interest in Kafka’s 1925 novel is understandable: The Trial is nothing less than an exploration of the relationship between man and God. The film is prefaced with Welles telling a story in a voiceover with a pinscreen animation on the screen, a fable about a man waiting at the door to the law (justice? judgment? heaven?). "The law should be accessible to every man," he says, but accessibility is not a simple matter. (Nor, surely, is man’s relationship to God or the determination of moral rights and wrongs.)

The story opens with Joseph K. (Anthony Perkins) being arrested on unspecified charges and follows the consequences of being an accused and its effect on his life, including the pursuit of a trial and acquittal in a system that seems corrupt, inefficient, and unfair. There is a series of encounters and scenes – Jeanne Moreau as K.’s prostitute neighbor, K.’s factory-like office with row after row of clerical workers at their desks, a street of large apartment blocks devoid of people or traffic where K. encounters a crippled woman dragging a trunk, a packed courtroom to which K. makes a speech reflecting both his defiance and his growing paranoia.

Welles plays K.’s useless Advocate, in bed throughout, tended by nurse Leni (Romy Schneider), who reveals her webbed fingers. Akim Tamiroff is Bloch, another accused, but one whose case has gone on for years, for whom the case has become the determinant in his life, dominated by Leni and the Advocate.

Welles puts out a huge amount of material here and it becomes an interesting exercise to interpret the various scenes and encounters in terms of the theological, the sociological, the psychological. The settings, filmed in Prague and Zagreb, with important interiors in Paris’ Gare D’Orsay, have the high drama and chiaroscuro lighting that is integral to Welles’ style. His morality tale is heightened by the surrealistic world in which it plays.

For all that, the film is unsatisfying. Perkins doesn’t offer the depth of characterization that might have made K. a more interesting protagonist, relying instead on his trademark tickiness. The resulting K. character seems flat and does not change very much over his series of distressing encounters. There is occasional anger and defiance, of course, but more profound responses to his accumulating experiences are lacking. In the end, if we care at all, it is out of curiosity – the intrigue of toying with a puzzle – rather than emotional identification or genuine sympathy.

Given the abstract, philosophical themes addressed, a more driving dramatic line might have unified the film, but its two hour length seems longer because it is chopped up into multiple episodes which often seem to be there to illustrate yet another point, without moving the story ahead.

The Trial, though, cannot be ignored. It will be important to Welles’ fans, film history buffs, and those who might enjoy exploring the Kafka themes on screen, flawed as the drama may be. The film is now in release in a carefully reconstructed print that is promised to be closer to Welles’ original than anything that has been available for many years.