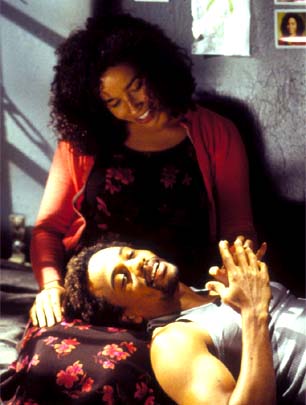 The Visit, no doubt reflecting the stage play on which it is based, is structured around a series of prison visits. The inmate is Alex Waters (Hill Harper), serving twenty-five years on a rape conviction–a crime he says he did not commit. Waters is defensive, snapping at real or perceived slights, creating barriers to the same human connections he badly needs. He has alienated his middle-class family; his parents have never come to visit him through five years of incarceration.

Now Alex is dying of AIDS. With help from a therapist (Phylicia Rashad) and faced graphically with his own mortality, Alexstruggles towards healing–himself and his family relationships. Tony (Obba Babatunde), his revered older brother, visits for the first time in ten months. (He has never brought his wife or kids.) Alex prevails on Tony to convince their parents to come for a visit. That visit turns into a disaster, with Alex’s father (Billy Dee Williams) dishing out enough guilt trips to qualify him as "Jewish Mother of the Year." Alex’s mother (Marla Gibbs) does what mothers do best and sustains her unconditional love for her son.

One other important visitor shows up unexpectedly, Alex’s childhood friend Felicia (Rae Dawn Chong in a radiant performance). Felicia has a history of her own–a crack addict and a prostitute with a son who has cerebral palsy, she killed her father when he beat the child. But Felicia has found her way back to a decent life, largely through religion and her church. She reaches out to Alex and offers the love and forgiveness of a peer.

The prison visits are interspersed with Alex’s sessions with his therapist, an appearance before the parole board, flashbacks to his childhood, and his wish-fulfillment fantasies of loving relationships with his mother, father and brother. The focus is on the conversations–interactions between Alex and the others that reveal the characters of each, that effectively uncover the dynamics of each family relationship as they struggle to find a rapprochementand as Alex struggles to make peace with himself.

Director Jordan Walker-Pearlman draws sensitive and deeply felt performances from his cast, but it is Hill Harper (The Skulls, He Got Game ) at the center who has, and meets, the biggest challenge. Harper captures the defensiveness and the hostility of Alex, the surface toughness, but he also lets the emotionally and spiritually needy side of Alex gradually show through. In the give and take of the conversations with his visitors, Harper delivers Alex as a complex character, alternately generating both angry reaction and loving sympathy to his changeable moods and responses.

Walker-Pearlman uses music to underline the emotion and occasional jump-cuts to give some edge to the long talk scenes, but he needn’t have bothered with the latter. The acting carries the scenes and Walker-Pearlman’s dialogue and screenplay make for an auspicious debut.