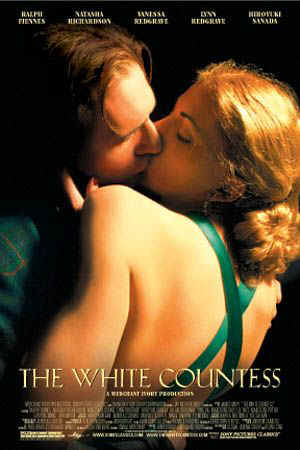 A sumptuous epic and war drama, The White Countess marks the end of the Merchant-Ivory collaborative endeavor, which began in 1961 and lasted until Ismail Merchant&#146;s death in May 2005. The White Countess takes place during 1936-37, during the two-year period leading up to the Japanese invasion of China and the outbreak of war between the two nations, known as the Sino-Japanese War. The story is set in Shanghai, then a cosmopolitan global crossroads, full of uprooted political refugees from Europe, Russia, Japan, and the Chinese civil war. Shanghai had an air about it of tolerance, desperation, decadence, political tension–an oasis of unreality in a dangerous and increasingly destabilizing world.

The White Countess is not typical of the painterly miniatures of previous Merchant-Ivory productions, such as Remains of the Day, The Bostonians, or Howard&#146;s&#146; End. It is more akin to David Lean&#146;s sweeping epic of love amidst revolution, Doctor Zhivago, where revolutionary upheaval becomes the terrifying sublime backdrop to what is a essentially a love story. Natasha Richardson, who plays the titular displaced White Russian countess, bears the terrible burdens of her family&#146;s and her country&#146;s fate, while delivering a graceful, restrained performance as a still elegant and beautiful noblewoman reduced to taxi-dancing and other, unmentionable services.

The widowed Countess Sofia Belinskaya must support her extended family, mother-in-law, sister-in-law, daughter, aunt and uncle. Shrewish, judgmental mother-in-law Olga (played by Richardson&#146;s real-life aunt Lynn Redgrave) and sister-in-law Greshenka (Madeleine Potter) constantly rebuke and condemn Sophia, all the while attempting to "save" the Countess&#146;s daughter Katya (Madeleine Daly) from her mother&#146;s fate and reputation by stealing the child from the reach of Sofia&#146;s motherly love.

One evening Sofia&#146;s conversation in a chance encounter with a social acquaintance from the old days, a Russian prince now reduced to working as a porter, is overheard. The diplomat Todd Jackson (Ralph Fiennes) seems to be some sort of businessman who has taken some serious knocks in recent times. He has only recently lost his sight and is becoming increasingly eccentric. Indeed, his present fascination with Shanghai night life, frequenting its bars and clubs nightly, is becoming a problem for his company&#146;s board members. Even as his colleagues are planning to have Jackson dismissed, Jackson himself places a highly risky bet at the race track–and he wins a small fortune, enabling him to open up the nightclub of his dreams, The White Countess.

Jackson, it turns out, had been instrumental in founding the now failing League of Nations. All around him the world provides evidence that peace and idealism are a fool&#146;s mission. The vision of his White Countess night club is a painterly miniature of an exciting world, tinged with danger but ultimately safely contained. His vision is a private one of aesthetic perfection, designed to keep away the chaos and randomness of the world. As the centerpiece of his club he envisions the perfect hostess, Sofia Belinskaya, the White Countess herself. Such perfection can never be sustained in a real world filled with imperfections, base motivations, the spirit of bellicosity, large, invisible malignant forces–and the seemingly benign Mr. Matsuda (Hiroyuki Sanada) will see to that.

Merchant and Ivory paint a large, brilliant, detailed canvas&#151;the multicultural, cosmopolitan International Quarter, filled with high classes and low. The recently fallen and the seemingly rising fortunes of rivaling political factions and the fantasy nightclub itself are dramatically realized through ever-changing set styles recreating the cosmopolitan culture that once was Shanghai. There seems an undercurrent of irony&#151;even as China and Shanghai are finally re-emerging to a level of power and glory on the world stage not seen since the 1930s, the whole world once again seems caught up in violent political intrigue, disillusionment with the United Nations&#146; ability to maintain world peace, and the ever-increasing threat of global cataclysm.