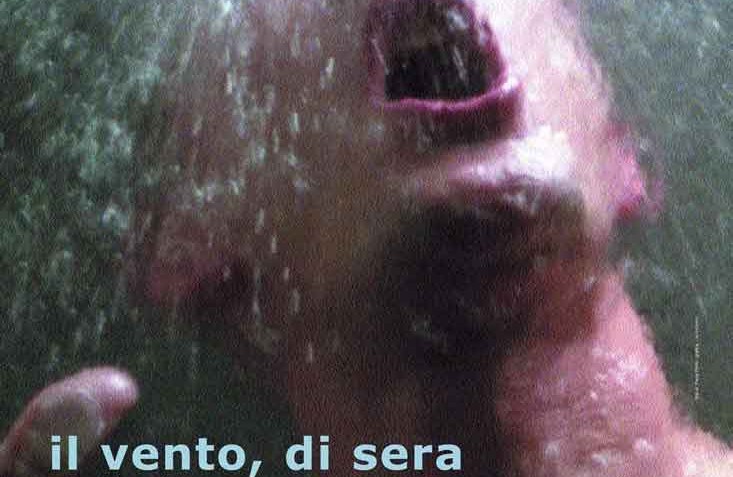 The Wind, in the Evening is the feature film debut of writer/director Andrea Adriatico, but its dramatic impact reflects on Adriatico’s prior experience in the legitimate theater. The film is carefully focused, dealing primarily with the experience of grief due to the loss of a spouse. Adding immediacy and topicality to an essentially timeless subject, the victim, Luca (Luca Levi), is an innocent bystander who happens to witness the assassination of a high ranking government official by a terrorist who then shoots Luca because of what he has seen.

Luca’s lover, Paolo (Corso Salani) has been waiting for him at home, preparing the dinner they were to have shared. Hearing the shots, he runs out to the street as does their neighbor and friend, Francesca (Francesca Mazza). Luca is rushed off to the hospital, followed in short order by Paolo and Francesca. There, the surgeon refuses to give Paolo even a hint of Luca’s condition because Luca is not legally "family" to Paolo. He learns of Luca’s death only by the chance overhearing of a newspaper reporter talking on his cell phone.

The phone comes into play once again. Paolo has Luca’s cell phone with him; Luca’s parents call, concerned because of news reports of the assasination. When Paolo tells them that Luca is dead, Luca’s mother icily tells him to get out the flat–it doesn’t belong to him.

Adriatico (along with co-screenwriter Stefano Casi) effectively makes these very real and legitimate points about the ways that gay couples are not equal before the law, but he doesn’t dwell on them. Paolo’s vulnerability to such unfair treatment serves only to rub salt in the wound of his profound loss. He is bereft, the structure of his life, the long-term loving relationship at its center is now broken and blown away like so many leaves in a windstorm.

In a not uncommon reaction to the sudden death of a partner, Paolo blames himself for Luca’s death. What if he had not rushed Luca to come home from work? Had he been five minutes later, the gunman would have been gone and this horror never would have happened. Luca flagellates himself and he runs his fist along an uneven brick wall until his knuckles bleed, expressions of both the guilt he (irrationally) feels and some need to make his excruciating emotional pain physical as well, as if somehow to make it more understandable.

The film follows Paolo through his grief-governed wanderings through the streets of Bologna, each encounter (with Francesca, with a kindly bartender, with a handsome young student who picks him up) illuminating the depth of his despair. Corso Salani inhabits the role of Paolo fully and he effectively conveys the emotional turmoil inherent in the situation. Frequent use of a hand-held camera adds a further sense of agitation and the darkness of the nighttime streets intensifies the existential loneliness at the heart of the film.

That Luca’s death occurs from an act of terrorism invests the film with timeliness. Who in the world is not aware of living at a higher level of risk now than just a few years ago? The randomness, the arbitrariness of who chances to be in the wrong place at the wrong time has been etched into world consciousness. And the survivors are left to cope as best they can.

(10747)
$4.79 (as of January 21, 2021 - More infoProduct prices and availability are accurate as of the date/time indicated and are subject to change. Any price and availability information displayed on [relevant Amazon Site(s), as applicable] at the time of purchase will apply to the purchase of this product.)
related posts