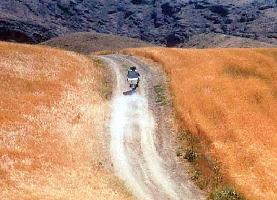 There&#146;s only one filmmaker working today who generates that response: Abbias Kiarostami. A leading figure in Iranian cinema and a critics’ darling (one went so far as to exclaim, "We are living in the age of Kiarostami."), he&#146;s considered by many to be the last great hope of cinema-as-art. It&#146;s an imposing statement until you see his work. For once, the hype is an understatement.

It&#146;s too early to call his latest release, The Wind Will Carry Us his masterpiece, as there is no reason Kiarostami should not continue to make films of this caliber for many years to come. It would make a grand contender, however, as it seems to touch on so many of his recurring visual and thematic motifs – isolation and a sense of community within an environment, an emphasis on nature and the cycles of life, various permutations of motion and stillness, physical/spiritual ascensions. It feels like an enigmatic work of summation.

A man (Behzad Dourani) who seems to be from the city drives into a rural Iranian village. He and some others, later learned to be a television crew, are present to observe and film a local burial ritual. Days drag on and the crew waits patiently to capture the event, while the harried man continually dashes up to the top of the village&#146;s hill to take various cell phone calls. In the end, he fails to capture the burial on film but finds a new respect for life.

The key elements of Kiarostami&#146;s films that delight so many cinephiles are the same elements that frustrate so many others. His works move at an incredibly slow pace. They seem superficially simplistic, yet can be maddeningly dense and difficult to decipher. Information pertaining to characters and situations seems doled out elliptically in fragments. But once the viewer falls into sync with the rhythms of his rather long shots and sequences, after a viewer has grown accustomed to the minimalist style of his storytelling, a mesmerizing poetry emerges. The filmmaker&#146;s pace mirrors the slower, more contemplative rhythms of nature, drawing a story out of small movements that, when brought together, create a whole that&#146;s greater than the sum of its parts.

In fact, what&#146;s not seen among those parts is almost as significant here as what Kiarostami does show. The preoccupied protagonist, who consistently rushes to the highest point possible to receive phone calls from an unspecified source is seen engaged in several conversations with unseen participants. Invisible, yet present in the situation, they seem intangible, another set of communications the man with a mission is receiving.

In one sequence, a prolonged dialogue with an unseen grave-digger, the earth spits up a leg bone towards the protagonist – a tangible object which connects the past with the present, the living with the dead. It&#146;s as if the spiritual messages, like the messengers themselves, don&#146;t require a visual manifestation; they act as signposts that the protagonist, and the viewer, must discover for themselves. As the film ends, the frustrated TV producer watches a flowing river head away from the village, finally stopping to admire the beauty of water rushing past. Only at his (and our) journey&#146;s end does the purpose of the journey make itself apparent.

For all its challenge, The Wind Will Carry Us is not an impenetrable museum piece without immediate pleasures. Like many of Kiarostami&#146;s previous films, it&#146;s filled with breathtaking compositions (no one better captures landscape on film), a gentle sense of humor that&#146;s never cruel or mocking and, perhaps most importantly, an empathetic view of humanity that is at once simple and profound. Intimidating and inscrutable as it may initially seem, The Wind Will Carry Us, met half-way, yields an extraordinary reward in Kiarostami&#146;s mytho-poetic vision. Long after the lights go up, the images, like the name of filmmaker himself, will remain fresh in the mind and heart.