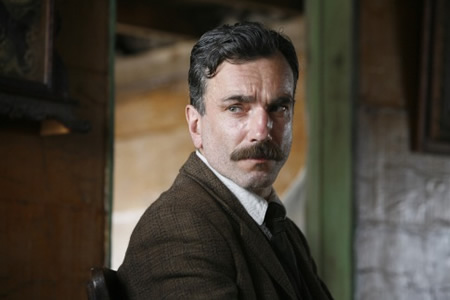 Screenplay:Paul Thomas Anderson. Based on a novel by Upton Sinclair.

Though talking about life, Macbeth could have been talking about Paul Thomas Anderson’s new film when he described "A tale…full of sound and fury signifying nothing." There Will Be Blood has the passion of an unforgettable performance and the mesmerizing look of a capitalist hell. But by the end of an exhausting two hours and forty minutes, it’s hard to find any meat on its beautiful bones.

Anderson (Hard Eight, Boogie Nights, Magnolia, Punch Drunk Love) bases his fifth film on Upton Sinclair’s 1927 novel, Oil! Most famous for his 1907 muckraking expose of the meat packing industry, The Jungle, and for his almost-successful, socialist candidacy to become governor of California- Sinclair’s novel is a damning indictment of the oil industry and its thinly veiled, twentieth century robber baron- Edward Doheny. Anderson retains the basic ingredients of the novel: the main character, Daniel Plainview (Daniel Day-Lewis); his son, H.W; the rough and tumble nature of the oil business; and a charismatic, adolescent preacher who defies Plainview, Eli Sunday (Paul Dano). What he most conspicuously omits from the novel is the class struggle between workers and oil magnates. But even that omission can’t obfuscate the Mephistophelean bargains that naïve California farmers make in selling their oil rights to a satanic capitalist.

Daniel Plainview evolves from a failed gold prospector to a hard-working, risk-taking, self-made, bastard of an oilman. Along the way he takes in a baby and raises him as his son. We see the hardships in this relatively new industry. We see the toll it takes on communities when they give themselves over to be drilled. We see a basically selfish man degenerate into complete and utter madness. And if all of this sounds interesting, it isn’t. The characters, the story, and the themes are the weaknesses of There Will Be Blood. But it has two undeniable virtues that, nonetheless, make it compelling.

Daniel Day-Lewis is the best actor of his generation and, arguably, of any generation making films in the English language. It’s hard to believe the variety in the characters he has created in Room with a View, My Beautiful Launderette, My Left Foot, In the Name of the Father, and Gangs of New York. Only Edward Norton and Anthony Hopkins come close to having that kind of range as actors. And Day-Lewis’ Daniel Plainview is as compelling as any of his other characters. His voice keeps rattling around in my head and I am afraid I’ll never be able to exorcise it. You simply can’t take your eyes off of him for over two and a half hours.

The other virtue of There Will be Blood is its cinematography. Robert Elswit filmed Anderson’s last three films, and his work in Magnolia was astonishingly good. Of late he has given a memorably distinctive look to Syriana, Michael Clayton, and Good Night and Good Luck. His work here surpasses anything he has ever done. When he bleeds the color out of the frame, he masters light and shadow like the great cinematographers who worked in black and white. Some of the images of grimy landscapes further blackened by oil stun us with their beauty and horror. At other times, he uses the brightness and vivid colors of a California sunset to contrast the smoke and soot of a functioning oil crane or the hellish reds of an oil fire gone out of control. As great photographers have often done, but most cinematographers cannot, he creates indelible images of faces without relying on extreme close-ups. And rarest of all, he is equally comfortable moving his camera fast when we need to feel chaos and letting it be still when creating the mood of studied old photographs.

The music in There Will Be Blood will thrill some and aggravate others. Johnny Greenwood of Radiohead, who is also the composer in residence for the BBC, jars us from the opening moments of the film. Sometimes we’re made anxious by what sounds like an infuriated mass of bees. At other times we have a full orchestral score that crashes into scenes a la Hitchcock. There are moments when the music assaults us like the pounding sounds of a pulsating oil well. Discordant music runs throughout the film, pushing the intensity and heightening the anxiety. Some will find this exhilarating and edgy, while others will be looking in their purse or pockets for some aspirin.

But all of the pyrotechnics in the look, sound, and performances can’t obscure that there’s no there here. And the most glaring hole in the film is its protagonist. Like his name, Daniel Plainview is plain. It’s not that we peer into his soul and see a monster. We never get beneath the surface to see any internal life whatsoever. But even without looking inward, Anderson might have given him the intriguing virtues of the real robber barons: they were technological innovators, superb organizers of their businesses, worked hard because it was God’s will, and had competitive instincts that would be the envy of any world-class athlete. But Plainview lacks genius, never doing anything that suggests an interesting mind. He works hard for reasons that are never explained- seemingly uninterested in pleasing God through his diligence or himself through the commodity consumption and power that come from success. He has a relationship with his son that is depicted without being explored. He seems to love the boy, at times, a bit. Yet he also exploits the boy for his own purposes. He seems to feel guilty when being a rotten father, but is uncomfortable with the consequences of affectionate feelings. It all adds up to nothing. We don’t understand Plainview’s own childhood; only that he had one and it meant something to him. We never glimpse what drives him, only that he is driven. Early in the film, he seems the rapacious capitalist. Then we begin to see him as more than amorally greedy, but malicious and cruel. Then we come to see him as a raving lunatic. Did his greed make him this way? Is there a conscience lurking inside him that drives him mad? Never knowing, we have only his grizzly evil and a charismatic performance to sustain interest in him. Ultimately, we not only never care about him, if we were ever meant to, but we lose interest in him.

Plainview’s nemesis, Paul Dano’s born-again minister, is equally crazy and equally opaque. He too rants, chews up the scenery, and becomes eerily creepy when he quiets down. But he is unknowable by us, and after two hours his strangeness wears thin. No other character in the film is allowed extended moments of tenderness or softness. And no other character is used to reveal dimensions of either of our main protagonists. Quite remarkably, there’s not a remotely interesting character outside of our two antagonists. That can only be attributed to poor writing.

But where Anderson the writer seems most out of his depths is in trying to say anything about the time or place. If the twentieth century was the "American century," our proprietorship was most fundamentally rooted in the dynamism and productivity of our economy. By 1910, California alone produced seventy percent of the world’s oil. And what are we to make of this transformation from a land of yeoman farmers to an industrial colossus? According to There Will Be Blood many capitalists were not nice men who took advantage of gullible people. There were risks involved, but the rewards seemed to justify them. Born again Christians may have had a moral compass suggesting something was off. But they were having too many hysterical interactions with the holy spirit to do anything that made sense or was effective. Bummer.

Even having an acting genius at the top of his game is not enough to give three dimensions to a character who lacks even two. And having a cinematographer that would have delighted John Ford can give us astonishing visuals of the American landscape, but cannot tell us anything about this America.

I was planning to open this review with: "There Will Be Blood is no Citizen Kane." But that seemed fatuous; no movie is Citizen Kane. But we leave Welles’ masterpiece on the shelf at our peril. And we mistake its ultimate greatness if we look to its deep focus cinematography and mis-en-scene and set design and all the other aspects of its technical virtuosity. Citizen Kane is a great work of art because its large and fascinating canvass of time and space never swallowed a character that we were eager to know. What drove him; what were his appetites, gifts, foibles and flaws, genius and myopia, creativity and cowardice, hubris and dynamism, humanity and venality? The more we inquired, the more we were rewarded with layers of complexity. And Citizen Kane uses its eponymous character to reflect on greatness and bathos in the heart of America. There Will Be Blood has no characters who repay our working to get inside them, and it has no thoughts beyond clichés about our country. We were entitled to expect more from the very gifted Paul Thomas Anderson.