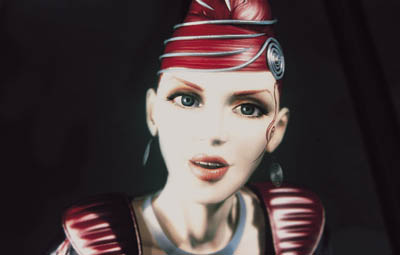 Thomas in Love takes the phenomenon of cyber-cocooning two small steps away from current experience. The protagonist, Thomas Thomas (voiced by Benoit Verhaert), is living his life in a completely computer-driven environment and the entire film is seen through his eyes, on his computer screen. What makes Thomas different is that he suffers from acute agoraphobia, fear of open spaces, and so he is confined to a specially built apartment and his interface with the world is exclusively through his computer. The second premise is to place the film somewhere in an undefined, but very near, future. The result is gentle, pointed satire and a very human story of disengagement.

Thomas’ closest human link is his mother, who is well-meaning but calls him more often than he likes and almost always at awkward times; he’s trying to get her to limit her calls to once a week, keeping her at arms length as he has kept all the world at a distance. His rather stern therapist seems more intrusive than supportive and is often directed by the dictates of the insurance company that is paying the bills. Sound familiar? Thomas’ condition may be extreme and in the future, but these characters and relationships have the ring of authenticity for here and now; his condition and the future setting are extensions of today’s realities and both serve well to frame the situation and explore the subtleties in an imaginative way. .

Then there is Clara, a computer generated avatar, Thomas’ regular partner for cybersex, for which he wears a special body-suit. But the shrink thinks Thomas needs something more and has (without consulting him) enrolled him in a matchmaking service. Potential dates start to pop up on the screen. And the insurance company has its own idea, referring Thomas to a prostitution service specializing in the handicapped. Through the dating service, Thomas meets Melodie (Magali Pinglaut), who is willing to experiment with Thomas’ cybersex, but is seeking something a bit more hands on, as it were–she wants genuine intimacy. But it is one of the prostitutes who intrigues Thomas. He catches Eva (Aylin Yay) in an off moment, wiping away a tear, and he’s intrigued both by her initial vulnerability and subsequent professional distancing.

Writer Philippe Blasband (An Affair of Love) and Belgian director Pierre-Paul Renders deftly sketch these characters, showing just enough to provide for the sort of individualized quirkiness that makes them both believable and interesting. The sense of "future" is mostly dependent on how the social and economic fabric works, with the advanced cybersex (and what must be a really broadband connection) the only technology on which they rely. The style of faces painted with varying patterns is another clever touch, different enough to suggest something new and perhaps futuristic, while not so far removed from today’s tatoo craze. With a small budget, but big imagination, Thomas in Love is as effective in creating its desired scifi world as any Hollywood blockbuster on fifty times the budget.

But the film is more than a series of online encounters. As character is built, so, too a plot emerges, a story growing out of these characters and their situations in what gradually comes to be seen as a Brave New Worldscenario–Thomas’ agoraphobia is as much submission to a sinister paternalism as it is escape. His motivation for real escape is a genuine human connection; whether it will succeed or not is less the point than the genuine liberation of making the attempt.