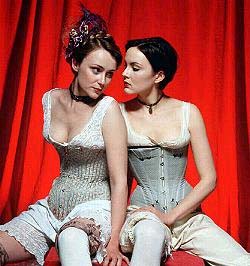 Nan (Rachael Stirling, The Triumph of Love) narrates her own story, first introducing us to her banal family that runs an oyster bar and to her bland boyfriend, Freddy (Benedict Cumberbatch). Everything changes for her one night when Nan sees cross-dresser Kitty Butler (Keeley Hawes, The Avengers) perform. Instantly infatuated, Nan returns night after night to watch her sing and beguile the ladies in the audience the way only Marlene Dietrich could in Morocco. Soon her devoted presence is brought to Kitty&#146;s attention, and the confident Kitty asks Nan backstage because she says, "I like to hear nice things about myself." In one of the show&#146;s many, often too cute winks at a modern audience, reticent Nan replies, "You seem so gay and bold." Kitty asks her to be her assistant to which Nan can only ecstatically assent. But Nan&#146;s sister Alice (Monica Dolan) warns against getting too close to Kitty&#146;s kind, saying about performers, "They don&#146;t live natural lives." Nan, of course, does not listen, and when Kitty&#146;s manager, Walter Bliss (John Bowe), decides to take Kitty to London, Nan is only too eager to run off with her.

The women sleep in the same bed every night, but Nan fears revealing her forbidden love to Kitty. Then one fateful evening, Kitty&#146;s jealousy over seeing Nan dance with a man launches them into a passionate embrace and they tumble into bed. Kitty comes up with the idea for Nan to be her acting partner, also in drag, and their act together meets with great success until an unforeseen turn of events.

In the third episode, Nan is at her lowest ebb, having left her love-hate relationship with Diana. Delirious, she seeks help from Florence and her socialist brother, Ralph (Hugh Bonneville, Iris). The final installment is the most indulgent as wish fulfillment fantasy as Nan uncovers Florence&#146;s deep, dark secret, gets to entertain at a lesbian bar, saves Ralph from stage fright at a socialist rally, and is thrown into a final, fateful audience-rousing choice.

While Tipping the Velvet isn&#146;t traditional Masterpiece Theater material, it&#146;s not all that far from it either. For all the sex and S&M, it is downright tasteful to the point of being arid. As is usually the case with television, the too clean, too precisely arranged sets don&#146;t help in this respect. Still, if not taken seriously as a period piece art, Velvet works as guilty pleasure entertainment. Sax&#146;s direction and the editing are often ludicrously overwrought, though Sax does put together at least one particularly inspired sequence &#150; Nan&#146;s first time on the stage is intercut with her rehearsals and it all culminates in a kiss between Nan and Kitty, both playing men. The most annoying element in Velvet is Nan&#146;s narrating voice-over, which too often simply states what is readily apparent on the screen. It&#146;s also where Davies&#146; dialogue is at its worst with lines like "open an oyster and it&#146;s like a secret world in there."

Throughout, Tipping the Velvet&#146;s saving grace is its actresses, who ease it past more than one rough patch. All three gorgeous leads, Stirling, Hawes, and May are magnificent, illustrating a vast and subtle range of emotions and reactions. They have a grace and sincerity often missing on American television where actors don&#146;t just act, but have to make a show of "acting." Here, the women just are. Stirling is convincing in her transformation from frightened sparrow into audacious hawk; Hawes shows how Kitty hides the turmoil of social pressures beneath a buoyant veteran demeanor; and May, who has always excelled as emotionally-battered characters, does the same here. Special mention must also go to Janet Henfrey (My Uncle Silas, The Ideal Husband). Playing an old, sassy tart named Mrs. Jex, she is one mean scene-stealer.