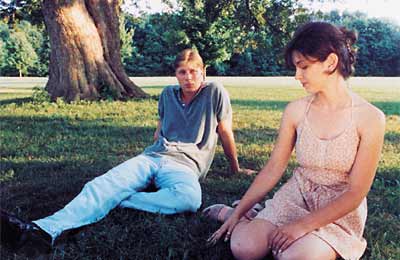 A toddler playing on the front lawn of a tract home in suburban New Jersey looks up to see a tall, sleepy kid, maybe 22, walking by. The door of the house flies open and another young man runs out to meet the passerby. They exchange a quick greeting, then walk together, silent. After a block, the kid from the house turns away, leaving the first kid to walk on alone. Fade to black.

This scene, the opening of David Maquiling’s Too Much Sleep, sums up the movie’s strategies perfectly: it’s a mild joke with no real punchline, funnier to think about later than to experience. This slight, amiable shaggy dog story about quirky behavior in lower middle class suburbia plays out as a loose string of vignettes in which nothing much happens. It’s like Blue Velvet without Dennis Hopper’s Frank to kick things into gear, or Slacker with New Jersey blue collar kids replacing the Texas bohemians.

Marc Palmieri plays Jack, a security guard who loses his gun while coming home from work. All he knows is that a pretty brunette (Nicol Zanzarella) asked him to give up his seat on the bus for an older woman, and that the unregistered gun was missing by the time he sat back down. He enlists Eddie (Pasquale Gaeta), a buddy’s well-connected uncle, to help him find it.

Eddie’s a classic smalltime blowhard, the strutting king of the deli where he spends his days telling stale jokes to his fellow retirees and recounting his days as a player in this tiny town. Jack is just what he’s been looking for: an excuse for an adventure and, more to the point, a fresh set of ears for his nonstop banter.

Armed with inside information on a gun theft ring, Eddie and Jack start making calls on local criminals. Eddie badgers and charms his way into their homes, flush with a new sense of purpose and a chance to show off for Jack. Jack tags along, as interested in tracking down the girl on the bus as he is in finding his gun. Each person they encounter sends them off to meet someone new, and the film mines their drifting for straightfaced, dry jokes.

Still living with his mother, prone to sleep through important meetings and more than a little dim, Jack imakes for an unlikely protagonist. He’s less a slacker than a loser, the sort of guy who can’t be bothered to do much of anything but who probably wouldn’t have very much to offer even it he did. He begins in awe of Eddie, sucking in the stories and picking up tips on charming and bluffing his way through situations. As he gains confidence (and starts to see through Eddie’s bluster), he becomes less interesting, a fledgling nebbish instead of a fullblown sad sack.

Maquiling has a knack for drawing unaffected performances from his cast – Gaeta is especially good – as well as a fine ear for the sort of listless conversations that serve no purpose but killing time. His sense of place is unique to the film: he manages to be faithful to the cramped interiors and monotonous uniformity of lower middle class suburban houses without betraying a hint of condescension. A lesser filmmaker would cram these living rooms with kitschy knick-knacks, emphasizing the characters’ bad taste as a signal to the audience that we should feel superior to them. Maquiling catches the feel of the milieu without ever judging it.

Yet for all its strengths, Too Much Sleep is ultimately uninvolving. With nothing much at stake in the story (Jack’s search for the gun is less a plot than a device to get us from one weird situation to the next), the film is only as good as its conversations. Save for a stray line here and there and some of Gaeta’s monologues, Maquiling is more interested in faithfully recreating banality than offering us wit or insight in his dialogue. The movie all too often ends up as lethargic as the banter. It’s caught between two styles, each one canceling out the other: the plotless drifting and willingness to bask in long, static moments undermines the story, while the story in turn raises expectations the film is uninterested in fulfilling.

Maquiling shows great promise as a director. If his next film manages to fully capitalize on his strengths – his warmth and affection towards his characters, his feel for people and places rarely explored in American films – it will be well worth seeing.