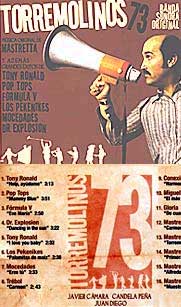 Torremolinos 73 is director Pablo Berger&#146;s first feature film, which has some irony being that it is the story of a man making his first feature film, which just so happens to be called Torremolinos 73. The film within the film, which aspires to Ingmar Bergman (Persona) and Federico Fellini (8 �), is much different, though, from Berger&#146;s end result, which resembles more the comedies of Harold Ramis (Analyze This) or Tamara Jenkins (Slums of Beverly Hills)–not that there&#146;s anything inherently wrong with that.

The story starts off in 1973 Madrid. Alfredo Lopez (an almost unrecognizable Javier Camara, Talk To Her) is a door-to-door salesman of a Spanish Civil War Encyclopedia. Hauling around the 3,080-page sample copy takes its toll along with broken elevators and people who disdain solicitors, which is to say everyone. Business is terrible and Alfredo&#146;s landlady is hounding him for several months of back rent. His sole source of comfort is his wife, Carmen (Candela Pena, All About My Mother), who supplies him with tender care at home. She works in a beauty salon and has to listen to customers rant about how one of them went into Last Tango in Paris thinking it was a musical, only to encounter sodomy instead.

Loaded with debt and faced with the prospect of making lots of money, Alfredo and his wife reluctantly embrace the new opportunity. A former assistant of Ingmar Bergman trains Alfredo and passes Bergman&#146;s influence on to him. It turns out Alfredo is a natural behind the camera and the reserved Carmen finds enthusiasm in sex in front of the camera. Before long, Alfredo decides he wants to make his own feature-length film, a contemporary homage to The Seventh Seal, but he discovers the real world always finds a way to complicate artistic idealism.

However, Berger&#146;s direction is a bit too rote and the film as a whole feels overly conventional. There is the familiar womanizing loser friend who fashions himself a hustler, and many of its sex jokes were already stale in 1973. The first half is a pleasing spoof of 70’s attitudes toward sex while the second half becomes a more tiresome spoof of Euro-art filmmaking that had already reached its pinnacle in Woody Allen (Love and Death). Berger straddles the cartoonish and the naturalistic with mixed results. Ultimately, Alfredo&#146;s comedic movie escapades and Carmen&#146;s difficulties with having a child don&#146;t cohere tonally, especially as they collide in the end. Camara and Pena almost lift it above an amusing diversion, but not quite.