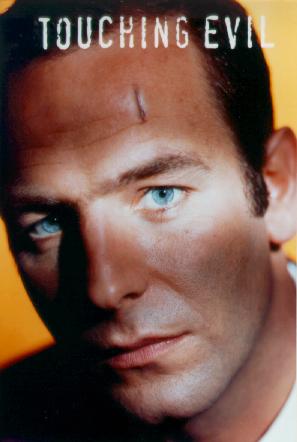 PBS’s Mystery! series has been providing a richly varied diet for the discerning whodunit fan for decades. The second of three filmed series of Touching Evil, a British-American co-production by United Film and Television Productions and WGBH Boston, continues the saga of D.I. Dave Creegan and his partners D.I. Susan Taylor, and D.C. Mark Rivers, of London&#146;s elite Organized and Serial Crime Unit.

The star, and usually central focus, of each episode is Creegan (played by the strong, silent, and terribly vulnerable-looking Robson Green, who will be familiar to PBS audiences from Reckless and Grafters). Writer, cinematographer, and fellow characters observe Creegan as he skates precipitously closely on the edge dividing professional duty (one might say, full-blown obsession) and personal trauma, and the synergistic interplay between the two. Creegan&#146;s two most notable characteristics, as host Diana Rigg points out in her introduction, are his &#147;piercing blue eyes&#148; which can see straight through to the soul of anyone, and the scar on his forehead left by a bullet wound some years before.

The viewer will readily notice how often the scar is foregrounded or made the dominant element in many scenes. However, Creegan, or rather, Robson Green, does not have the eyes of a real-life trauma survivor. Actor Green&#146;s sexual charisma on-camera easily distracts attention from this detail. (Does sexual unavailability induced by deep trauma create such sexual charisma in real life?)

To be fair, Susan Taylor (played by a butch, brunette, non-nonsense-appearing Nicola Walker) and Mark Rivers (played by Shaun Dingwall with his shock of impeccably styled, strawberry-blond public-school haircut) each have their turn in confronting personal demons tapped into or brought about by the line of special forces police work. In keeping with the contemporary layering of psychological crime-story narrative, what holds the various discrete episodes together is the character development of the flawed-heroic trio, individually and as a close-knit circle of friends.

There is an almost tiered wedding-cake feel to the piling up of criminal episodes, which contribute to the growth, often by grave error of judgment, of the cops hooked on serial killers. What suspends the high-wire act of psychological drama is the symbiotic cops-and-robbers relationship between all the walking wounded, between the psychologically wounded-turned-good-doers (the exemplar of which is brilliantly captured in Tim Burton&#146;s noir Batman of 1989) and the psychologically wounded-turned-evil-doers.

Series 2 divides the cast of criminal stories into three two-hour segments. Each two-hour segment stands on its own as a crime story. However, as with many of Mystery!&#146;s past series, the exploration of character development (who, not what, is Inspector Morse? Jane Tennison? Adam Dalgliesh? Miss Marple?) is not merely a narrative device, but often an immensely engaging and satisfying viewer experience in itself.

The nature of the three tales at hand are also connected by the mise en scene&#151;the sets, the lighting, the atmospheric filming, the complex social contexts. There is much running down narrow corridors, hallways, and catwalks. London appears to be bathed in endless fog, of a bluish tint, a husky, hazy atmosphere cut and crosscut by sharp white or yellow spotlight beams. The sets often conjure the noir-in-color atmosphere of Ridley Scott&#146;s classic Blade Runner; ever-present English-feeling Gothic arches replace the American Frank Lloyd Wright&#146;s Prairie School architectural details of Blade Runner.

The noir atmosphere, punctuated with the periodic running along corridors of a surrealist&#146;s nightmare maze, symbolize the psychological reality which both criminal and crime-fighter cohabit. Touching Evil (the title makes the moral and psychological commingling explicit) moves beyond the simple convention in most of the Series 2 stories. By far the most delectable aspect of these Creegan & Co. tales is the honest, accurate, and razor-sharp observation of the violent sociopath&#146;s criminal mind. Many of the adventures explore in detail just how close, if not identical, the wounded soul of a cop (who devotes his or her life to investigating serial killers and other extreme &#147;monsters&#148;) is to the wounded soul of the innocent victim-turned-mass victimizer.

In Episodes 1 and 2, written by Mike Cullen, a young computer geek named Emerson, coincidentally a serial killer of young women, comes to the attention of the OSC. After several gruesome and ritualistic murders, in which young female victims are seemingly chosen at random, disburdened of both life and scalp, Creegan and company ensnare Emerson in a carefully laid trap. In an abandoned shed D.C. Rivers confronts the killer on the verge of another throat-slitting.

Meanwhile, D.I. Taylor has become romantically involved with reporter David Laney, who has been covering the serial murders from the start. Over this time Laney has also been in regular email communication with Emerson. Things take a bone-chilling turn after Emerson, securely jailed and granting only oracular pronouncements when brought in for questioning, asks for a shock of D.I. Taylor&#146;s hair if he is to cooperate with the police. The serial killings continue, so Emerson, clearly, cannot be the murderer. Or can he?

In this first story Cullen explores the dynamics of power and manipulation, as they emerge as clinical symptoms of a violent sociopathic personality. Key elements, as contemporary psychological theory holds, arise in protracted childhood abuse, often sexual in nature, compounded by additional trauma, which wounds the victim&#146;s psyche. Sometimes an adult sociopathic personality emerges; sometimes a guilt-ridden and self-doubting &#147;do-gooder&#148; personality emerges, overcompensating for the existence of evil acts (and people) in the world.

In this first episode Cullen examines how the narcissistic (intensely egoistic) victim-turned-victimizer may seek to compensate by seeking power, whether by manipulating another human being or by asserting total domination by stealing a life. One of the deftest demonstrations of this complex psychodynamic was illustrated in Thomas Mann&#146;s short story Mario and the Magician, a study of the fascistic mind on the eve of World War II. As the linkages of domination a la The Cabinet of Dr. Caligari emerge, the mirror face of this power struggle within the three OSC officers&#146; own psyches is made abundantly clear. Even as Creegan and company are drawn further into danger, it is the seduction of the potential evil monster inside of each of them which allows the bait to be swallowed. It is only that mirror&#146;s surface which seems to hold the fine line between good and evil.

In Episodes 3 and 4, written by Sian Orrels, this psychological definition and explanation of evil is explored again. A series of homicides across Europe draw attention to the OSC force when the latest ritual murder occurs in London. In each case the body has been lovingly washed, encased in a white sheet (suggesting both an angel wrapped up and a corpse in a body bag), and a clean hole made in the skull&#151;do-it-yourself lobotomies done with a drill, a large nail and hammer, or a pick.

The case develops into a situation of stolen identity. As the plot complicates with Rivers and company&#146;s personal demons getting mixed up in the chase, the underlying theme of split temporal realities takes over. War trauma, post-traumatic syndrome, and other names for such a deep and seemingly permanent shattering of the psyche are not well understood by untraumatized individuals. The trauma victim lives in two states of reality&#151;the one the moment of trauma, permanently frozen and ever-present, while the &#147;real world&#148; in which we all live our lives, the symbolic world full of social meaning and a sense of safety, unfolds, ticking away relentlessly. And for the trauma victim this normal reality may seem like an evil joke, a Kafkaesque impersonal warping of reality intended to draw out the torment of trauma endlessly.

Jim Keller, the serial killer, sees himself as a savior, an angel of death, relieving his friends from the days in Bosnia of what he perceived to be their unending torment. However, his grip on normal reality slips away completely, in a hauntingly nightmarish sequence of scenes in an abandoned bath house (and reminiscent of Apocalypse Now). Again, and driven at even more relentlessly, yet subtly, the viewer better understands Creegan and company&#146;s own trauma demons, as each of them, in varying degrees, struggles to stay away from the edge of the slippery slope from trauma into madness. This is very scary stuff!

The final episodes, also written by Mike Cullen, are intended to send the show off with a bang. The story line intertwines the dangers which Creegan&#146;s professional life poses for his post-divorce family with two cases, a personal vendetta against Creegan and matter of a high-stakes international "pedophiliac" ring. The common theme is the vulnerability of children, explored to the counterpoint of the most explicit and voluminous violence in the "Touching Evil" series. Whether agreeing or not that the subject matter and violence contained here is warranted, the viewer will be left with a plate full of food for thought regarding "cops and robbers" and the complex inner lives of Creegan and company.