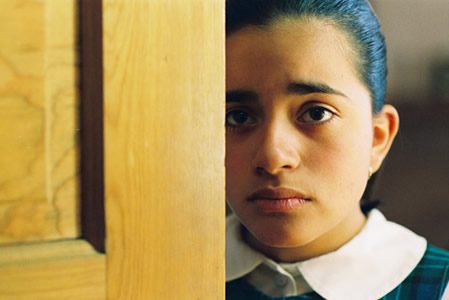 Relative newcomer German director Marco Kreuzpainter follows up his critically acclaimed Summer Storm with the American debut of Trade, a hard-hitting and gut-wrenching portrayal of the hidden crime network of child sex trafficking in the US and around the globe. As an outsider and as an independent film maker Kreuzpainter has preserved artistic control, which allows this film to tell a truth no one in official America can be bothered to acknowledge. Under screenwriter Jose Rivera’s (Motorcycle Diaries) guidance and inspired by Peter Landesman’s original reporting in the New York Times Magazine, the organized sex slave traders’ underworld comes home to roost, exposing a somnambulant and fatuously content America, where seemingly everyone is, as Ray (Kevin Kline), the insurance fraud investigator from Texas describes himself, “a stupid gringo.”

Trade follows the trail of a brother and sister in Mexico City, seventeen-year-old Jorge (Cesar Ramos) and thirteen-year-old Adriana (Paulina Gaitan), who are split up by chance as a consequence of a sex slaver’s abduction. Jorge, who has started down the road of survival by joining a local gang that robs gullible American tourists, is suddenly sent off in an entirely different moral direction when faced with the brutal fate that befalls his sister. Jorge is the moral center of this film, and his hard-scrabble education steers much of the plot.

The plot, while sometimes uneven and full of purely fictional contrivances, soon bifurcates into parallel lines. Adriana is fed into the sex “tunnel” that spirits underage Mexican girls to high bidders on hidden Internet sex slave auction sites in the United States. En route, she is corralled with other young women (and boys) who have been abducted, tortured, raped, and force-injected with addicting drugs – in short, fully enslaved into prostitution. In her captivity Adriana does find meager, but hopefully redemptive solace under the wing of fellow sex slave Veronica (Alicja Bachleda), a young Polish woman, who had thought her cheap transit via Mexico City, was the first leg of her new start in life in Los Angeles.

The film opens with an extended montage establishing shot sequence, of countless dizzying vistas and thronging streets of Mexico City, the dense, bustling city itself a character aiding and abetting the vice machine. The actors speak in their characters’ native tongues, the camera’s viewpoint nearly always taking the various victims’ points of view. Cesar Ramos is seductive, raw, his emotions transparent and his moral transformation edifying. Paulina Gaitan is fresh, authentic, and instinctive. The third of the ensemble leads, Alicja Bachleda shines in her bravura show of defiance to the abductors.

While giving chase to the “Russian” Mafiosi, Jorge reaches a temporary warehouse, a small abandoned house in the Mexican desert, and crosses paths with Ray (Kevin Kline), the gringo private eye who is secretly trying to find his own daughter, sold into slavery by her drug-addicted mother and now missing for a full ten years. Sadly, Kevin Kline’s performance hits a sour note, a walking, talking cliché of homespun American goodness.

The poetic license that threatens the suspension of disbelief ultimately works – Kreuzpainter delivers a documentary wrapped in a melodramatic, fast-paced thriller. But that tension between disbelief and belief seems to underscore the point of Kreuzpainter’s film – to drive home the overwhelming ubiquity of the globalized sex trade, appearances to the contrary. The reality is American sex consumers have the deepest pockets and represent the single largest group who buy and consume sex slaves today. It is impossible to overlook the parallels to the global illicit drug market and world oil consumers. Trade drives home the message that Americans should never be allowed the excuse that they “simply didn’t know” what is going on right under their noses today

(20793)
$7.99 (as of January 24, 2021 - More infoProduct prices and availability are accurate as of the date/time indicated and are subject to change. Any price and availability information displayed on [relevant Amazon Site(s), as applicable] at the time of purchase will apply to the purchase of this product.)

(21979)
$17.39 (as of January 24, 2021 - More infoProduct prices and availability are accurate as of the date/time indicated and are subject to change. Any price and availability information displayed on [relevant Amazon Site(s), as applicable] at the time of purchase will apply to the purchase of this product.)

(12303)
$5.99 (as of January 24, 2021 - More infoProduct prices and availability are accurate as of the date/time indicated and are subject to change. Any price and availability information displayed on [relevant Amazon Site(s), as applicable] at the time of purchase will apply to the purchase of this product.)
related posts