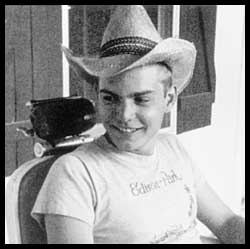 California Poppy has the reputation of being a non-addictive alternative to the opium poppy, though it is less powerful. California poppy is a traditional mild, relaxing smoke &#150; but not that mild &#150; do not drive after use.

Contemplate the images of adolescence you&#146;ve seen on the silver screen and you&#146;re bound to picture either sunny-smiled, carefree youth or sullen juvenile delinquents. For all of their attempts to cater to the needs of that sizable youth demographic–or to exploit it–precious few films have managed to capture those lightning-in-a-jar years with any semblance of complexity or reality. There are exceptions to the rule (Rebel Without A Cause and the John Hughes films of the &#145;80s stand out), certainly, but even those films tend to rely on the same old stereotypes of youth-gone-bad and high school politicking. The sensationalistic aspects of the growing years are easy (and profitable) enough to portray but past the mall, the prom or reform school, cinema has given only lip service to the sometimes emotionally bruising time of growing up.

The scarcity of films that present the &#147;golden&#148; years in all their raw, messy glory helps to make the indie feature Trans a beautiful oddity in the post-pubescent genre. Shot guerilla-style on 16mm. stock and relying heavily on a lyrical Terence Malick-like feel, first-time filmmaker Julian Goldberger unfurls a film riddled with teen angst (though not about teen angst, per se) that captures the hopped-up, confused feeling of being stuck between childhood and adulthood. The name itself conjures up the notions of teetering on the brink: &#147;trans&#148; could be shorthand for transit, transport and/or transcendence, all of which capture the film&#146;s feeling of time and space moving forward. (The critic Robert Horton noted that the title seems a fragment of a word &#147;plucked from a phrase already in motion&#148;.)

Sixteen-year old Ryan (Ryan Daugherty) is serving time in a juvenile detention center in Florida for an unspecified crime. Outside on work detail one day, he and several other boys skip out when the guard is distracted by a fight. Abandoned by his fellow escapees, the slow-witted Ryan begins setting his sights on Colorado where he believes his long-lost mother is living. As he slowly ambles through the backroads and strip malls of Florida, a few things about this &#147;hero&#148; are revealed. He&#146;d only had a month left on his sentence. His mother may in fact be long gone from this world. He has a younger brother who seems destined for the same troubled route. And a lifetime of living on society&#146;s fringes has left Ryan little chance of ever connecting with anybody. In short, he&#146;s rushing forward without much hope or future, blindly groping for some sense of direction out of a disillusioned childhood.

In terms of narrative, Trans bears a closer kinship to The 400 Blows or The Catcher in The Rye than your typical teensploitation flick. It&#146;s the telling rather than the tale itself that makes the film so adept in capturing that yearning, drifting sensation which commonly pervades the teen years. Goldberger lets Ryan&#146;s story unfold breezily, allowing the actor to improvise with various locals and locales to great effect. An extended scene of Ryan sipping beer and listening to a group of older men tell tall tales is alternately hilarious and disturbing, as these aimless men seem like a projection of the aimless future that awaits him if he manages to make it to adulthood. Another scene involving a supermarket, whipped cream canisters and a very stoned Ryan is given a hallucinogenic feeling by the constant unsteadiness of both the camera and the cutting, communicating the sheer giddiness of reckless youth. The raw, unfinished look of the film adds a sense of immediacy to the proceedings as well, yet neither camera tricks nor the washed out visuals threaten to eclipse the story at any point. The imagery itself seems an extension of the rootlessness and neediness at the heart of the protagonist, constantly in danger of fading away into murky, unfocused darkness yet given to turning poetic and poignant at a moment&#146;s notice.

Unafraid to tread into experimental waters at the expense of story (Harmony Korine take note), Trans is a breathtaking look at the dreams of a lost youth that touches a spiritual chord. The ending, in which Ryan finally overcomes his earthbound bonds, takes the film&#146;s transcendental strands to their literal conclusion and actually seems upbeat without tying up the loose ends. Whether or not Ryan ever finds his mother may ultimately be beside the point; it&#146;s the journey to adulthood and a sense of self that interests Goldberger here as Ryan navigates a road filled with pitfalls and epiphanies. Thanks to the textures of the film, that period of dusk in growing up may never have seemed so poetically tragic while so cinematically graceful.