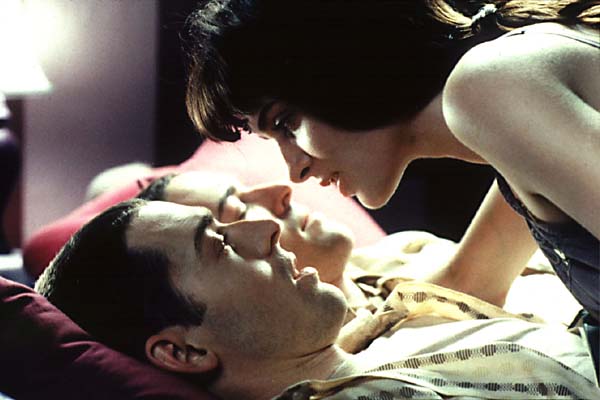 Twins And What They Tell Us About Who We Are

Dancing Naked In Front of the Fridge And Other

Twin Falls Idaho is a winner. On a small budget, a young and creative writer/director, Michael Polish, has made a gentle, thoughtful, imaginative film. Polish and his twin brother (who shares the writing credit) play a pair of conjoined twins. Celebrating their birthday in the sleazy hotel in which they are staying, they hire a hooker, Penny (Michele Hicks), to join them. The initial shock of seeing two guys sharing two arms and three legs leads her to bolt, but she soon returns, having left her purse behind – and having nowhere else to go.

Thus begins an exploration of emotional neediness at the edge. The twins, who worked in a freak show, are joined, not only physically, but as well in the intimacy of their shared history and mutual vulnerability. In a brilliant touch, Polish has them whisper to each other at key moments when they are confronted with new information. The whispering underlines both the need for agreement between them at times when they might need to make a decision about what to do (or not to do) next, as well as the facility of communication and mutual consideration they have developed to cope with their interdependence. They are brothers, but their intimacy is greater even than most married couples’. Still, they do need to communicate, so their separateness, their individual identities, are implicit in the whispering, too.

Polish finds simple, creative images to visually convey underlying feelings. There is a rather large, mesh-covered peephole in the door to the twins’ hotel room. We get the view from both sides – outside looking in, inside looking out – a cage, an imprisonment, a separation of the freaks, the ones who are other. We see their birth certificates which are interfolded, even as they are.

There is another hooker, seemingly Penny’s only friend, and her sympathetic doctor, Miles (Patrick Bachau), but Penny is mostly a loner barely keeping her life afloat. Despite being emotionally needy, she retains an openness, a giving quality that allows her to connect with the twins. The study of identity, of otherness, blooms into a love story as well.

A series of incidents and encounters explores the condition of being different and a variety of responses to differentness, even as the love story develops. Miles crosses himself when first seeing the twins. A nun, aghast at the realization that the creature at her door on Halloween is not in costume, slams the door in their faces, but a Black minister named Jesus comes freely to their assistance when they face a medical emergency. Other aspects of the story introduce the context of Christian mythology, but Polish doesn’t force the issue, satisfied to put into the mix an awareness of the values that are part of the Christian ethic and, as often as not, honored in the breach.

The twins’ performances are a marvel – subtle, nuanced and believable. As written and played, they come off as sympathetic, not pitiable, because they are not self-pitying. They have a wry sense of humor and the strength that comes out of coping long-term with adversity. Hicks makes an auspicious debut here, nicely catching both the vulnerability and the strength of Penny’s character, and convincing in the changes in the character through this new experience. In another bit of clever direction, Penny appropriately wears a lot of cheap-looking makeup when playing the whore, at the beginning, but as her relationship with the twins deepens, the makeup gradually lessens – her protective mask uncovered, her trust in the twins permitting her to let her vulnerability emerge.

Though made on a low budget, the film is thoughtfully and effectively designed, using saturated colors and strong contrasts of light and shadow to create an air of mystery – not a whodunit mystery, but a deeper, internal mystery of the spirit and the soul.