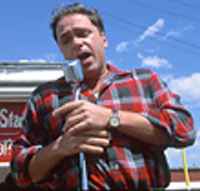 Two Family House starts out like a period sitcom – 1950s Staten Island blue-collar Italian-Americans gently, rather affectionately satirized. It takes its time buildingits characters and its story, which is told as family history in an unneeded voiceover by a character who is never older than an infant during the time encompassed by the film. (It matters not that the story is a true one and that it is the filmmaker’s family history. Not only does the voiceover device not add anything of significance here, but it also has the effect of distancing the viewer one step from the goings on. It borders on cutesy and belies less than confident filmmaking.)

But if the story rambles a bit, it does know where it is going; it turns out to be less predictable and more interesting than the anticipated sitcom. The film does a fine job of developing solidly rounded characters for two of its three prinicpal players. Buddy, a would-be crooner, gave up his chance for the Arthur Godfrey Talent Scouts when presented with an ultimatum by his fiancee, Estelle: Arthur Godfrey or her. Buddy dreams of getting out of the unpromising grind of factory work, but none of a series of attempted ventures into independence works out.

In one more grab for his dreams, Buddy buys a dilapidated two-family house, planning to live upstairs and fix up the lower floor as a bar (where, of course, he will sing). The problem is that the current upstairs tenants won’t move out. The tenants are an older drunkard and his much younger wife, Mary, who is not long off the boat from Ireland and pronouncedly pregnant.

Writer/director Raymond De Felitta creates a strong sense of the mores of the time, the place, and the Italian-American community of which Buddy and Estelle are part. The local tavern is the social club for the men; the wives hang out and gossip at a diner. Family is important; all generations get involved in every crisis. Racial and ethnic bigotry (particularly against the Irish) and the sexism of the era are not spared. (In all likelihood, these folks never even heard the word, though the effects of sexism are well evident in their day-to-day lives.)

Buddy ‘s character emerges naturally through the accumulating incidents of the film. The performance of Michael Rispoli (Summer of Sam, The Third Miracle, The Sopranos) brings out a sympathetic hero – a gentle and caring guy who won’t give up dreaming and who may even be able to break through the community and family pressure to pursue his dreams. Mary (Kelly Macdonald, Trainspotting) rather unexpectedly becomes a key player in that process; Macdonald draws a spunky character who will only let her sensitivity and real charm show when her defenses are gradually lowered. An initially amusing performance by Katherine Narducci (also a featured player on The Sopranos), as Estelle, captures the satire effectively, but she becomes rather monotonously shrewish in her refusal to believe in Buddy – more a fault of the writing, one suspects, than of the performance. A more likable Estelle, a less single-response character, would have given more power to the ultimate resolution of the story.

Still, Two Family House sneaks up on you in the nicest ways. It would be hard not to root for underdog Buddy and what finally happens is credible because of the solid character-based groundwork that was accomplished earlier. In a setting that could be a minefield of cliches, De Felitta steps nimbly around the traps and keeps dialogue, incident, and tone fresh. It’s a successfully warm and sincere film in a year of cold and cynical releases.