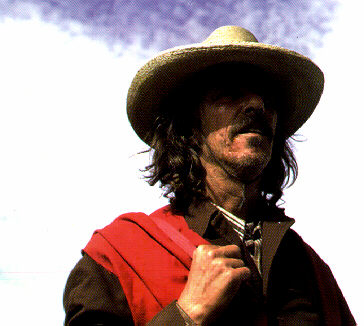 Into a Desert Place: A 3000 Mile Walk Around the Coast of Baja California (1995), Graham Mackintosh

The Forgotten Peninsula: A Naturalist in Baja California

the Great Murals of an Unknown People

The Lost Treasures of Baja California

Under California is a road picture, in the great tradition of road pictures that includes such diverse movies as The Wizard of Oz, Easy Rider, Thelma & Louise, and last year’sBrazilian hit Central Station. What road movies as a genre have in common is travel: the key character or characters start at Point A, generally a known or familiar place, and travel to distant, sometimes unknown destinations, in the process undergoing some kind of transformation.

Under California director Carlos Bolado takes us on the journey of an artist, Damian (Damian Alcazar), who is fleeing from a real, or possibly imagined, accident, the hit-and-run killing of a pregnant woman. Damian, tortured by guilt and the memory of the accident, leaves his wife – also pregnant – in Laguna Beach, and travels to Baja California in search not only of his roots, but also a grounding of his values, a renewal of his faith, a healing of his soul. Every incident that occurs relates to the spiritual journey of Damian – Damian the artist, Damian the husband and incipient father, Damian the Los Angeles born Chicano. (Damia was a classic spirit of fertility; damiana are the dried leaves of a Mexican plant, used to treat impotence.)

As Damian travels deeper into Baja, he has a series of encounters each of which adds an element to a linear plot line that implodes into complex and multilayered meanings which Bolado has structured into his film with the density of poetry.

Damian encounters a mysterious pilgrim on the road who suggests a ritual exchanging of hats. The pilgrim refuses Damian’s offer of a ride; he must walk, as he is doing a penance. Damian is carrying a letter from his mother to be left for his grandmother at her grave, but after meeting the pilgrim, he impulsively leaves his course and drives west, away from his destination, towards the sea where the whales are singing and the waters run red. He collects bones on the beach and builds a skeleton, then sits in its center like Jonah in the belly of the whale – Jonah, who also was to deliver a message and evaded his responsibility to do so. Damian burns his truck and continues on foot, now intent on his pilgrimage and on his penance as well.

Bolado explores many aspects of the Mexican/Mexican-American experience. He touches on the history of the missions and the Jesuits and that confrontation of European religion and values with the indigenous peoples, people who continue their lives there to the present day, the Jesuits long gone. Damian bridges the cultural divide as he learns of lives in Mexico lived with values very different from what he has known in the U.S. When he reaches the remote mountain region where earlier generations of his family lived, he discovers that nearly everyone there shares the same family roots, their history known in detail and carried through an oral tradition. The connectedness of family, the utterly essential part of life that is building family, and the precious and vulnerable children who carry the family forward in time – these are the values that Damian needs to understand in order to be able to overcome his fear/guilt/grief and resume building his own family.

Bolado is a great observer of the Baja landscape. He shows us the detritus of rusting cars at the roadside, the futility of powerful modern machines in the face of the harsh wilderness. We see glistening beaches, desserts shimmering in the summer heat, and the rugged sierras. There is a vivid series of images of giant saguaro, the cacti of lifted arms, keeling over like so many felled trees. Most brilliantly, Bolado weaves into the story the extraordinary ancient cave paintings high in the mountains of Baja, paintings which speak to Damian – and to us – of the continuity of human life through family, the indomitableness of the human spirit, the universality of the expression of humanity through art.

When he first runs away from his quest, there is a scene of Damian reaching the sea, the sea beyond which one cannot run, a scene which is a direct allusion to Truffaut’s final freeze frame in The 400 Blows. But Damian is not the boy of Truffaut’s film. He is a man who has set out on a quest and finds the insight, the transformation he needs to return to a meaningful life. At one point, asked if he is a believer, Damian responds, "I believe in belief." Bolado’s conclusion is heartening, affirming, reassuring; his film is a statement of faith.