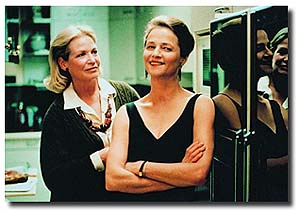 Director Francoise Ozon was under 35 when he made Under the Sand, a remarkable film that is all the more remarkable for the youth of its director. The subject matter–aging, loss, mourning–would seem the domain of a more senior filmmaker, but Ozon has accomplished a thoughtful, serious, and compelling movie that renders his chronological age irrelevant.

Marie (Charlotte Rampling) and her husband Jean (Bruno Cremer) drive to their country house for a holiday. Ozon lingers over ordinary details of their activities: gathering wood for a fire, dinner al fresco, Marie looking in a mirror, examining the skin under her eyes, applying a cream. They’ve been married twenty-five years and they are accustomed to one another, but they also seem comfortable together and considerate of each other–it seems a loving relationship.

They go to the beach–a red towel and her red dress contrasting sharply with the bright blue of the sky and sea. While Marie naps, Jean goes off for a swim. She wakens; he is still gone. As time wears on and he hasn’t reappeared, she grows more worried and reports him missing to the authorities. A search by lifeguards and helicopter turn up nothing. The premise is established. Did he drown? Was he a suicide? Did he simply run away? And why?

Some months later she is back in Paris, teaching her classes at the university, working out at the gym, attending a dinner party given by her close friend, Amanda (Alexandra Stewart). But Marie continues to speak of Jean in the present tense, as if he had merely gone off on a business trip, perhaps, and will be back shortly. She is in deep denial, at times imagining Jean to be with her, even buying him a new tie.

Kubler-Ross‘ postulated stages of dying, often extended conceptually to the bereavement process, are: denial, anger, bargaining, depression, and acceptance. Marie goes through her share of all, but acceptance is elusive; the mystery of a disappearance adds many complications. If he committed suicide, why? (Suicide is a great stimulus of guilt in survivors.) Might he have run off out of boredom–and the lack of an heir–as her vicious old mother-in-law suggests?

Ozon keeps Marie front and center throughout the film–there’s hardly a scene without her. Through a series of incidents he plumbs the depths of her responses to her traumatic loss. Rampling, glamorous and sexy in her 50’s, gives an emotionally open, virtuoso performance that vibrates with truth and aches with unreleased sorrow. There are no histrionics: Ozon and Rampling convey Marie’s behavioral reactions to her bizarre situation, the depth of her suffering understood by indirection. The beginning of an affair, for example, serves to further examine her emotional state as she responds (or doesn’t) to a new lover, having not yet let go of the old.

Ozon makes no attempt to spell things out, but rather observes the (carefully chosen) events. He raises questions without necessarily answering them, but the asking itself is sufficient. Water is his dominant metaphor, seen repeatedly in scene after scene: the Seine, the sea, a bubbling fish tank, a swimming pool, a rain storm, a quote from Virginia Woolf’s novel, The Waves, about a drowning by suicide–the book itself about the connectedness of souls. If Jean presumably drowned in the sea, Marie is surely drowning in the flood of her grief, her abrupt disconnection from her soul partner.

With a very still camera and disciplined editing, Ozon avoids excess. There’s neither a wasted nor an overextended moment. The score, including fine original music by Philippe Rombi, enhances the emotional impact without overwhelming the subtlety of the psychological study taking shape on the screen. Ozon exits on a deliberate note of ambiguity, underlining the complexity of his portrait of the intricate maneuvers of a broken heart.