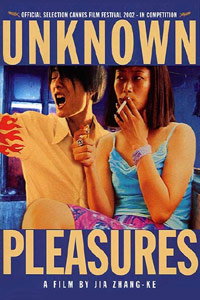 There isn&#146;t much obvious pleasure in Unknown Pleasures, a film by Jia ZhangKe, a hot young director at the forefront of new Chinese cinema. But despite the fact that there&#146;s little dramatic arc, little dialogue and little joy in the lives of its characters, Unknown Pleasures is riveting. Shot on digital video in an extremely slow, documentary-like style, the film is almost an anti-travelogue in its modern-day depiction of a decaying industrial town in Shanxi, a northern province in China near Mongolia. The crumbling city, complete with dingy, semi-populated, decrepit cement buildings, is as much a star in this compelling dirge of a film as its protagonists: two kids, who at 19 are already so disaffected that they see no point in living beyond 30. (Jia, who made Platform, a movie with similar themes, is in his early 30s).

Though brutal, the movie is a stunning achievement as it honestly and sensitively exposes in 113 minutes a world and culture unfamiliar to most viewers outside China. If the goal of film is educate and enlighten as well as entertain, then Unknown Pleasures unquestionably succeeds &#150; and is beautiful, too. Viewers will feel as though they&#146;ve stepped into this dying city themselves.

The semblance of a story revolves around friends Xiao Ji (Wu Qiong) and and Bin Bin (Zhao Wei Wei), who do nothing more than hang out, chain smoke, play pool or watch karaoke. There&#146;s really no possibility of getting a job, and even when Bin Bin, in an unusual display of ambition, tries to enlist in the military, he gets rejected. (The reason adds just another morsel of doom to the bleak scenario.)

Xiao Ji, a virgin who purposely wears his hair in his face, also manages to muster up the energy and courage to pick up on a sexy dancer/prostitute Qiao Qiao (Zhao Tao), who&#146;s kept by a thug. One of the film&#146;s few amusing moments, which is quite recognizable to American audiences, is at the beginning, during a performance in which Qiao Qiao does a cheesy dance routine to sell Mongolian liquor. But when Xiao Ji finally gets a tepid kiss from Qiao Qiao, purely at her discretion, not his, there&#146;s little reaction, let alone passion.

Equally bloodless is the relationship between Bin Bin and his uptight girlfriend Yuan Yuan (Zhou Qing Feng), who, because she has plans to go to university in Beijing, puts off Bin Bin&#146;s mild advances when he tries to place his arm around her. On their "dates," they watch karaoke together, singing the saccharine lyrics of pop songs in scenes that scream irony to Western audiences.

Later, when Yuan Yuan is accepted into school and literally lets her hair down and asks for a kiss, it&#146;s Bin Bin who rejects her. Sitting next to each other on a bench in a big empty room, Yuan Yuan gets up on her bike and slowly cycles around in circles, as Bin Bin stares into the empty atmosphere.

Meanwhile, televisions ubiquitously blare in nearly every indoor scene. With references to Quentin Tarantino, the characters revel in, and reflect on, American gangster culture. And in one TV news scene when an explosion is being reported, someone asks, "Are the Americans attacking?" Ultimately, though, the references to the United States mostly provide an enormous contrast to the lives portrayed in this seemingly post-apocalyptic society. And although the characters do anything but wear their hearts and dreams on their sleeves, their quiet resignation to their unfulfilled lives has a heartbreaking &#150; and universal — human quality.

(18661)
$4.89 (as of January 22, 2021 - More infoProduct prices and availability are accurate as of the date/time indicated and are subject to change. Any price and availability information displayed on [relevant Amazon Site(s), as applicable] at the time of purchase will apply to the purchase of this product.)

(7742)
$9.89 (as of January 22, 2021 - More infoProduct prices and availability are accurate as of the date/time indicated and are subject to change. Any price and availability information displayed on [relevant Amazon Site(s), as applicable] at the time of purchase will apply to the purchase of this product.)

(28088)
$13.99 (as of January 22, 2021 - More infoProduct prices and availability are accurate as of the date/time indicated and are subject to change. Any price and availability information displayed on [relevant Amazon Site(s), as applicable] at the time of purchase will apply to the purchase of this product.)
related posts