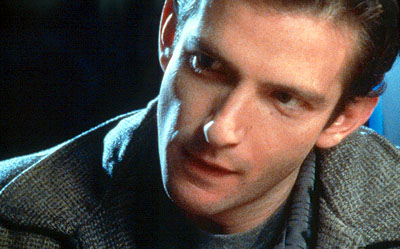 Urban Legends and Their Meanings

The Big Book of Urban Legends

In Urbania, first-time director Jon Shear uses a neo-noir stylethat aptly frames his story (based on a play by Daniel Reitz) about love found and love lost in the sex-charged, violence-prone, always vaguely threatening big city. Shear fills the screen with incidental passages based on "urban folklore" (such as the female sexual predator who steals men’s kidneys) and the kind of street people that seasoned urban dwellers usually do their best to make invisible–the beggars, the crazies, the bizarre. You’re emphatically not in Kansas any more.

The central character, Charlie (Dan Futterman), is heartsick for a lover who has moved on; he’s unable to sleep and given to leaving desparate messages on his ex’s answering machine. That Charlie is gay is important to the film and the context of his experience, but the film doesn’t develop the kind of enclosed gay-ghetto sensibility that makes the straight characters intruders; the gays and the non-gays are enveloped together in the stressful world of unpredictable strangers and strangeness. "Just when you though you had it all under control…" Charlie says. Control and lack of control is an issue here. Risk and loss is an issue–particularly in matters of emotionalcontact and sexuality. And likable Charlie turns out to be working the edges of danger himself, as if he needs the element of danger to get him past the numbed emotions left by love lost.

Shear skillfully captures this steamy atmosphere and takes his time to develop Charlie into a rounded character, intelligently played by Dan Futterman who shows the gentle surface, the emotional distress, and surprising underlying anger and violence. Charlie is the only genuinely three dimensional character; the others are little more than cameos, there as foils to elucidate the story and reflect back on Charlie. The best of these isAlan Cumming as Charlie’s friend Brett, bruised and brittle and all too ready to retaliate perceived slights with biting words. (He’s dying of AIDS after "the cure" has been found and complains, "I so hate being behind the curve.") Dean (Samuel Ball),the tatooed sleazeball who Charlie tails through much of the film is appropriately thuggish, but no more.

Too often Shear has the dialogue (or the voiceover) spell out his themes, unnecessary redundancy when the events onscreen are clearly making the points. And his imagination-charged multipicity of incidents (many based on documented "urban legends"), while thematically related and cleverly interwoven, are tangential and threaten to overwhelm the central plotline and dissipate the forward thrust of the story. Less might have been more in this case.

Still, on a limited budget, and pioneering new techniques in digital post-production processing, Shear has created a thoughful and multilayered film permeated with a powerful atmosphere of menace that carries the drama despite its flaws. So much is out of our control, he suggests (did he really need to name a bar "Karma"?), but even when we regain an illusion of control, that may turn out not to be the answer after all. "There are some times," quotes Brett doing Glenda Jackson, "when nothing has to be better than anything."