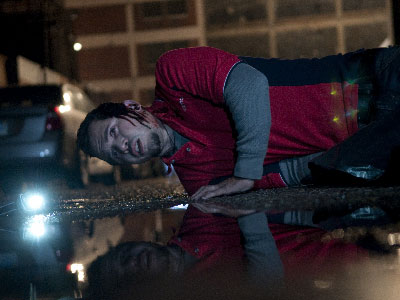 It’s what they do! Or rather, what they’re doing nowadays. Proving that the Motor City’s renaissance is not just about new Chrysler ads, the President’s Tamla-Motown thing or Eminem is this slight, low-budget crypto-sci-fi teaser by Brad Anderson, whose previous films include The Machinist and Transsiberian.

Vanishing on 7th Street offers an interesting cast of survivors, shells of empty buildings, the extravagantly Art Deco Fox Theater, and deserted streets that aren’t sets-they’re just Detroit. Shot in under twenty days on a digital Red camera in the best Blair Witch tradition of inventive necessity, it’s the first of many crypto spook-fests.

These days, Detroit is the number one choice for dystopias about the future of the human race. If you’re looking for an abandoned city where everything living has been canceled, all power is cut, and nothing works-except a whopping tax break for moviemaking-Detroit’s got it all.

Theater projectionist John Leguizamo is spooling his spools when the theater lights go out. Locating a flashlight he finds his audience all gone except for their clothes, out, no phone signal, and no explanation. Wandering into the emptied streets with his flashlight, he encounters abandoned cars and cell phones, an eclipsed sun, fading photos, and finally three strangers.

The strangers band together in a constant quest for lighters, matches, and flashlights. No explanation is given, although a recurring nuclear shadow implies that this apocalyptic calamity is an act of man rather than of any god.

Shattered Glass and Star Wars survivor Hayden Christenson, Thandie Newton, John Laguizamo, and Jacob Latimore huddle together with him in an empty saloon with a dying gas generator. A 14 year-old newcomer, Latimore is probably the most convincing, though the other three have been stellar elsewhere. But all of them overact here, as if on X Files sequels. Anthony Jaswinski’s script is not to blame, nor is Lucas Vidal’s attentive soundtrack.

Corny? You bet your sweet ass it’s corny. Vanishing on 7th Street embraces corniness like a lover. Even the audience laughing in the first scenes chew up the scenery, laughing as though their pants are on fire. And do we get any kind of explanation? As in most matters of corn, no way.