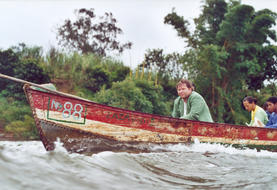 Consider taking a Dramamine before going to see Veloma. The main-title and opening scenes are filmed from a sailboat speeding before a stiff wind in high seas. Viewed from a low angle and close up, the huge waves loom overhead accompanied by the sounds of the roaring wind and the rumbling sea.

Philippe Lalinec (Patrick Pineau) is sailing solo in a ’round the world race. Intensely caught up in sailing his boat, he says, "You’re supposed to be one with your boat." But he’s got a real shiner from a pulley hitting him in the face and he doesn’t trust "her" anymore, personifying the boat. Director Marie du Laubier quickly establishes the intensity of the solo sailing experience, both in the constant interaction with boat and sea and, as well, in the interior, emotional state of the sailor. She shows not only the rough, but also the gentle sea, sunlight at dawn and at dusk, moonlight at night, creating seascapes that would make J.M.W. Turner take note.

Philippe arrives back in La Rochelle, completing his voyage with a degree of notoriety. Five months at sea, he is the last to finish the race, two months after the winner crossed the finish line. His loving partner, Lucie Terani (Julie Depardieu), strokes his body as they lie in bed, noting his many bruises. "You wanted to be last," she says. "I wasn’t in a race," he explains to their six year old son, Vincent (Thibault Patell), "I was sailing around the world…I’m part of the sea." And, indeed, he has great difficulty finding his way back into life on land – "land sickness."

Philippe visits a friend, a gentle, dreadlocked Madagascan, but the history of their friendship and what happened in Madagascar is veiled in mystery. Then Lucie gets a phone call from the Coast Guard: Philippe’s boat has been found adrift and his whereabouts are unknown. He is assumed to have drowned. In a series of scenes that call to mind the parallel situation in Under the Sand, Lucie refuses to believe he is dead. But then, a visit by an insurance agent sets off a course of action that will lead to Madagascar.

Along with de Laubier, screenwriters Jean-Pol Fargeau (Beau Travail, Trouble Every Day) and Alexis Galmot combine skilled storytelling and emotional nuance with great economy of dialogue. And de Laubier draws superb performances from all her actors. Pineau (Venus Beauty Institute) powerfully portrays a man haunted by unexpressed needs–for solitude? for a simpler life?–which conflict with his deep attachment to his family. Depardieu (daughter of Gerard) subtly copes with her own growing sense of loss while responding to the needs of her son. Patell gives the most appealing performance by a juvenile in memory–natural, charming, boyish, aware, emotions rippling across his face, responding in rapid succession to the complications presented by an adult world.

Veloma is not only exploringthe mystery of a man drawn by unknown demons away from his established life. All the minor characters (an unsympathetic neighbor, the insurance salesman, Lucie’s friend Simone) are dealing with aspects of loving and being loved–or not, reflecting the quandary in which the leads are enmeshed. The tone of the bittersweet, of the piquant give-and-take of love and lovelessness, is enhanced by Piaf and lots of Francis Cabrel on the soundtrack.