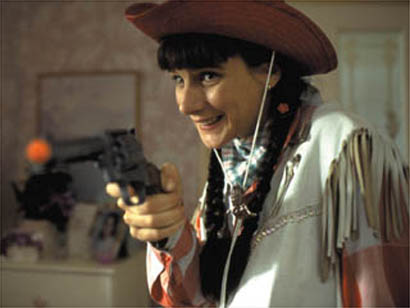 Very Annie Mary is unpretentious and sincere, and it has Rachel Griffiths as its star, all to its credit It’s also a mess of a film, corny, cliched, and cloying through a good deal of its over-elaborate plotting and forced humor. It bogs down in its own sentimentality like flies in molasses. It makes Waking Ned Devine look like a work of cinema genius.

When Annie Mary was sixteen she won a Welsh singing competition which granted her a scholarship to study voice in Milan. She had to turn it down because her mother was dying; then she lost her voice and hasn’t sung since.

The movie opens some years later, with Annie Mary living with her father (Jonathan Pryce) upstairs from his bakery business. He’s enamored of opera and his own voice, a real ham taken to driving his truck around the countryside in a Pavarotti mask and costume, speakers blaring "Nessun Dorma" for all the village to hear. He’s also vain and self-important and treats his daughter with pure disdain, squelching any initiative she wishes to take.

Griffiths, a brilliant chameleon of an actress, has recently gained wide recognition in the HBO series, Six Feet Under, but she had already won a considerable following amongst movie fans for a wide range of performances–as the prostitute Bettina in My Son the Fanatic, as Emily Watson’s sister in Hillary and Jackie, as Dennis Quaid’s wife in The Rookie. As Annie Mary she’s remarkable in a sympathetic, but most unflattering role. Writer/director Sara Sugarman has the thirty-something Annie Mary arrested in adolescence–awkward, clumsy, wearing awful clothes and an unflattering hairdo. She sneaks cigarettes, unsuccessfully propositions the only available young man in town (who is about to go off as a Baptist missionary), and teaches singing when she’s not burning the bread at the bakery.

There’s also a sub-plot about her best friend, Bethan, an invalid for whom the town is busy raising money so that she can go off to Disneyland. A gay couple is thrown into the hopper for no discernible reason. And it is all interlarded with occasional songs–invariably sentimental chestnuts or bottom-of-the-barrel disco ("YMCA," for example).

Only when Annie Mary’s father suddenly has a stroke does she gain the independence of mind to make some changes. Then there will be the expected variety of forays and disappointments before the predictably happy ending. Situations that are supposed to be hilarious aren’t even mildly amusing–Sugarman will try anything for a laugh from scratch-and-sniff bibles to falling down pants to drag lip-synching. Annie Mary is the only character who changes at all during the film; all the others pretty much start and end the same way.

The comparison to Waking Ned Divine is telling. It also took provincial British small town folk and built a comedy out of a slight plot. But along the way it built character and offered real charm. It’s a disciplined and focused film, a droll and winning light comedy. Sugarman, in contrast, throws ideas into the pot like a cook out of control, and overloads her movie with unexplored characters and half-developed situations Even Griffiths can’t rescue this porridge of a picture.