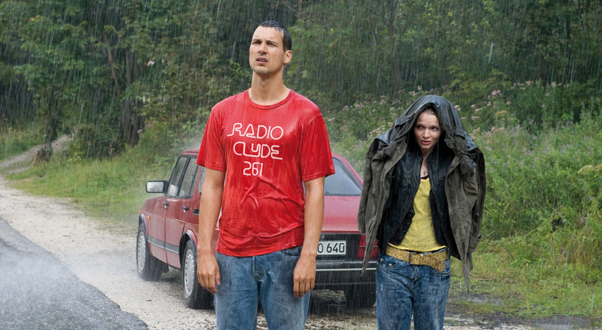 Whether classed as a drama, a comedy, or a road movie, “Vincent Wants to Sea” is a perennially favorite Hollywood tale. Vincent (Florian David Fitz) suffers from Tourette’s syndrome. Following the death of his mother, with whom he had been close, Vincent’s father dumps Vincent in an institution. Vincent’s inability to prevent himself from blurting out obscenities at the most inopportune times is a primary tool for the film’s humor.

Vincent is also summarily dumped by the institution’s caseworker in a roommate situation with a fellow “handicapped” patient. (The subtitler made the unfortunate choice of translating behindert, which means “handicapped,” as in “retarded.”) Vincent’s roommate Alexander (Johannes Allmayer) seems to suffer from an extreme form of OCD, and is a strict disciplinarian, banishing all germs with the use of tissues, sprays, and commands. Vincent is promptly told he may not use the bathroom for peeing or pooping. Alexander collects medieval military figurines and we first meet him lovingly and painstakingly painting one.

Marie (Karoline Herfurth), another patient, pops her head in the door and invites Vincent to join her in a cigarette outside. Cigarettes and alcohol, Marie informs Vincent, are signs that the patient is not taking his treatment seriously and can be expelled for it. Marie is the “bad girl,” whose sexual allure Vincent cannot resist. Meanwhile, she is an anorexic, who is literally starving herself to death.

As a road movie, the tag chasing feels a bit contrived. (Dr. Rose and Robert have no problem catching up with the trio again and again, only to lose them in the madcap car chase.) As a comedy, it must be said there are some truly funny moments. Fortunately, the mental “handicaps” are not played for as many gratuitous laughs we might expect from a Hollywood product. In fact, the film usually keeps the humanity of all the characters in sight.

The acting is satisfying, especially writer-actor Florian David Fritz’s character Vincent, who is charming in his winsome vulnerability. Karoline Herfurth’s “bad girl” Marie also extracts some compassion in her portrayal of an anorexic hell-bent on self-destruction. In no sense great or exciting, “Vincent Wants to Sea” is worth an evening of popcorn-munching distraction.