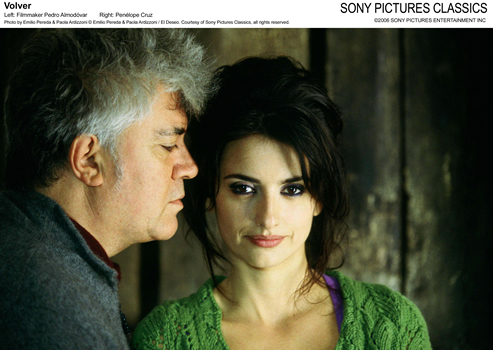 With Volver Spanish director Pedro Almodóvar seduces his audiences more subtly than in his previous work. The hard, bright visual surfaces of his signature hyperreal style still predominate. But Volver wends its way playfully through Dalí-esque surrealism, nineteenth-century melodrama, pictorial realism, and classic Hollywood noir, into a complex study of moods and relationships. Critics have esteemed Volver a more mature, if lesser film, and therein lies its seductive charm – it is an impossible hybrid, (in the words of at least one observer) an epic comedy.

Almodóvar is increasingly concerned with style, and Volver delights, eschewing camp and brittle irony for deeper, heart-felt explorations of mood and the precise experience of complex emotions and relationships. Volver is about family ties, women’s relationships with each other, and Almodóvar’s genuine love and appreciation of women. Volver is, at its heart, also an affectionate, but complex meditation on the director’s own mother and the womenfolk of his rural La Mancha childhood and poor working-class Madrid youth.

Deftly and with deceptive simplicity, Volver begins as a retelling of Mildred Pierce. Poor, hard-working Raimunda (Pénelope Cruz) is married to an unemployed laborer named Paco (Antonio de la Torre), who may or may not be the father of their daughter Paula (Yohana Cobo). When Raimunda comes home from work to find her daughter has stabbed Paco to death, mother quickly invents an alibi to protect her daughter, and assumes the guilt herself.

The melodramatic foreshadowing preceding this moment moves between farce and horror. The night before, Paco pauses in the doorway to watch his daughter disrobe. From an angle directly over the kitchen sink, Raimunda is shown carefully cleaning a very large knife, her pair of melon breasts tantalizingly mooning the camera. Paco later masturbates when his wife rejects his sexual advances (and this on the same day Paco has been fired from yet another job). Not only will Raimonda, like her filmic predecessor Mildred Pierce, protect her daughter by taking blame for the murder, but will soon find herself transforming a failing restaurant into a smashing success.

At times Volver seems to channel Rainer Werner Fassbinder, with whom Almodóvar shares a love of Hollywood melodrama. Where some of Fassbinder’s most memorable work was inspired by Douglas Sirk, Almodóvar pointedly steers his audience to Mildred Pierce. Remembered films mix with childhood memories here, and, as if to make this point, in a later scene Visconti’s Bellisima runs on a television set.

Another plot line begins when Raimunda’s mother, Irene (Carmen Maura), or rather her ghost, returns upon the death of her own sister Paula (Chus Lampreave) to their impoverished pueblo in La Mancha. The apparition of Irene appears first to Paula’s caretaker Agustina (Blanca Portillo), the daughter of a deceased village neighbor. Other villagers soon claim to have seen Irene’s ghost. Of course no one is surprised to hear this. Of Raimonda’s home village it is well-known that the men die young and the women live long. The town also has the highest rate of insanity anywhere in Spain -– people are frequently driven mad by a powerful sirocco-like wind that blows only there. How the dead, memories of them, and the deads’ own memories intertwine is all important, and is wickedly lampooned in the memorable opening scene, of an army of women villagers cleaning and polishing headstones in the local necropolis-like cemetery, as if pantomiming a Roman orgy.

Of course, when Irene’s ghost stows away in the trunk of the car of her other daughter Soledad (Lola Dueñas), Sole can only capitulate to the ghost’s pleas and let her move in with her and niece Paula (who is by now living with her tía Sole). The womenfolk soon find it scandalous, but not in the least improbable. The screwball plot is played for mirthful laughs, as Irene becomes explained away as “una rusa sin papeles” – an undocumented Russian alien who speaks no Spanish – now working as Sole’s assistant in her illegal hairdressing home business.

A third plot strand involves the mysterious kinship between the sisters and their childhood friend, Agustina, who is suddenly diagnosed with terminal cancer. Agustina sets off on a quest to learn the secrets of the dead, and may face a showdown on a nationally broadcast trash TV talk show. As the mysterious disappearance of Agustina’s mother, which coincided with a fire in which mother Irene and her husband perished a few years before, becomes more mysterious, a thick conspiracy of silence becomes deafeningly audible to the audience. The tension wavers delicately between farce and horror.

As Volver’s multiple and brightly-colored surfaces take on depth and weight, nothing is what it seems. Each woman will find herself hopelessly entangled and impugned in each other’s past transgressions. And, in fact, the title of this film begins to make much more sense — volver is a common, but complex basic Spanish word, meaning to turn over, to turn upside down, to return, to put back, to store, to repay, to restore, to start doing over again.

Volver was intended as a vehicle for Pénelope Cruz, and she emerges here as the heir apparent to Sophia Loren. Alberto Iglesias provides a lush, orchestral score, and Cruz’s character sings (or lip-synchs) the show-stopping title song “Volver,” after a long day (in another plot strand) feeding a film crew in “her” restaurant (perhaps channeling Lotta Lenya as Doris Day). Variations of bright reds saturate the screen, over and over, drawing attention to the also lush cinematography of José Luis Alcaine. Lastly, the ensemble acting is superb — Lola Dueñas, Blanca Portillo, Chus Lampreave and Yohana Cobo each turn in complex and well-tempered, if less flashy performances.