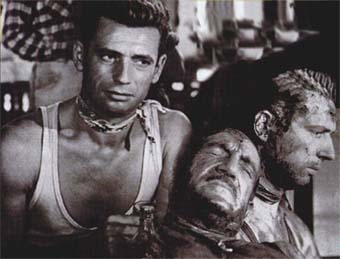 The Wages of Fear is a certified classic with one of the most famous plots in film history. Four men undertake a suicide mission to earn $2,000 apiece by driving two trucks loaded with dangerously unstable nitroglycerine 300 miles across the rugged terrain of South America to the site of a ferocious oil-well fire. The nitroglycerine has the necessary explosive force to extinguish the petroleum-fueled flames. The oil company – and each of the truck drivers – knows it will be a miracle if even one of the vehicles reaches its destination without blowing up en route.

At least half of The Wages of Fear is a grim and twisted "on the road" film. But its larger theme is the end of the road, the dead-end nowheresville that&#146;s depicted in the movie&#146;s first hour, before the perilous nitro trek even begins. The film unfolds like Apocalypse Now in reverse – rather than a journey into the heart of darkness, it&#146;s a story that begins in hell and shows us the kind of doomed characters for whom playing a game of Russian roulette with a gas-pedal feels like a dose of existential freedom.

Director Henri-Georges Clouzot filmed The Wages of Fear entirely in France, primarily on sets he convincingly constructed to resemble a squalid South American town. He had lived and worked for several years in Brazil, so it was a part of the world that he knew well. Not only does the town look authentic in its wretched verisimilitude, but Clouzot brilliantly underscores the stultifying rhythms of impoverishment and the casual cruelty that passes for day to day life in the lower depths. A stench of hopelessness and economic deprivation seems bred into the dirt of the streets. The opening shot is a close-up of trapped and agitated cockroaches tied together with thread; next, we see a half-naked native boy toying with the insects and pulling at them like a puppeteer. (Sam Peckinpah would later utilize a variation on this chilling sequence when he directed The Wild Bunch.)

The townspeople live in the shadow of an exploitative U.S. oil company that employs its own strong-arm security force to patrol the company&#146;s 900 miles of snaking pipeline. In addition to oppressed natives and arrogant oil workers, the town is comprised of outcasts and fugitives – thieves, confidence men, murderers, ex-Nazis. No one in this assortment of losers has arrived in town by choice. And none of them is looking to stay. It is from this cesspool of humanity that the story&#146;s four protagonists emerge to seek a fast fortune as nitro haulers.

The 32 year old singer and actor Yves Montand became an international movie star on the strength of his performance as Mario, the exiled Corsican and petty criminal. With his neckerchief and low-cut T-shirt, he is the epitome of virile and carefree French bonhomie laced with callousness. Especially nasty is Mario&#146;s mistreatment of Linda, the barkeeper&#146;s sexy assistant, played with manic verve by Vera Clouzot (the director&#146;s Brazilian-born wife). Mario&#146;s attraction to Linda is born purely of boredom and lust. He is far more interested in forging a friendship with a new arrival in town, an imposing gangster and fellow Frenchman named Jo (Charles Vanel), who is broke and on the lam from Paris. In one of the film&#146;s cleverest sequences – an exquisitely edited series of vignettes – Mario gives Jo a tour of the town, every crummy obscene corner and highlight, and then as they stand in the barroom doorway during a dreary rainstorm, Mario says succinctly: "It&#146;s like a prison here. Easy to get in. But no exit. If you stay, you croak."

It is a testament to Clouzot&#146;s instincts for psychological tension that he paces the first half of the film in a seemingly aimless fashion. As we observe the desultory hostilities that percolate up from the poverty and despair – indeed from the aimlessness itself – we begin to share Mario&#146;s itchiness to escape this godawful hellhole. When Mario and Jo finally join together as partners on one of the nitro trucks, the free-floating anxiety we&#146;ve been experiencing solidifies into genuine suspense and tightens around the storyline, as well as around the film&#146;s pacing and editing.

The gangster Jo is the first to crack under the pressure of hauling the explosive cargo. Previously, he displayed steely-eyed calm in a barroom showdown, and the film hints that he may have ruthlessly killed another trucker in order to land the nitro job. Once he gets behind the wheel, his transformation into a broken and cowardly old man is perhaps the film&#146;s most pointed irony. It is one of several story elements that mirror (and reverse) episodes from earlier in the film. Jo is humanized by his cowardice – he confronts a paralyzing fear within himself that brings with it a childlike innocence and helplessness. Before the journey ends, he will nearly drown in a pool of oil while trying to help Mario dislodge the spinning wheels of their truck. Charles Vanel&#146;s performance as Jo is a marvel – both deeply touching and painfully pathetic. He unexpectedly mutates into the film&#146;s one wan touchstone of compassion. But it&#146;s not a pretty sight.

The second nitro truck has an odd couple of its own: Luigi (Folco Lulli), an amiable Italian cement-mixer, and Bimba (Peter Van Eyck), the requisite ex-Nazi. When we first meet Bimba, he seems little more than a stereotypical blond German goon with a penchant for cadging free drinks from behind the bar. Yet, soon after he takes to the road his ingenuity and skill come forward when he devises a makeshift nitroglycerine bomb that enables the men to blow up a monstrous boulder blocking a mountain roadway. The boulder is such a perfect symbol of futility that it seems culled directly from the pages of Albert Camus&#146;s essay on absurdity and struggle in the modern world, The Myth of Sisyphus. Although The Wages of Fear never devolves into mere allegory, it nevertheless clearly reflects the postwar French existentialism developed by Camus and Jean-Paul Sartre.

Clouzot was a few years ahead of his time in combining the excitement of a genre film with philosophical exegesis, a style that would come to fruition with the next generation of New Wave filmmakers like Francois Truffaut and Jean-Luc Godard. Inexplicably, Clouzot was disparaged by these young upstarts for his reliance on studio sets, intricate scripting, and high-tone professionalism. The only film by Clouzot that Godard considered worthy of respect was The Mystery of Picasso, the extraordinary documentary of Pablo Picasso at work creating a series of paintings specifically for the camera. Godard, of course, wanted his own films to suggest the improvised immediacy of a work of art created on the spot. And he unquestionably succeeded. Just as Clouzot succeeded with The Wages of Fear in creating a masterpiece of formal perfection on an epic scale. It&#146;s a pulse-pounding classic that breathes the rarefied air shared by the likes of Akira Kurosawa&#146;s The Seven Samurai and John Huston&#146;s The Treasure of the Sierre Madre.