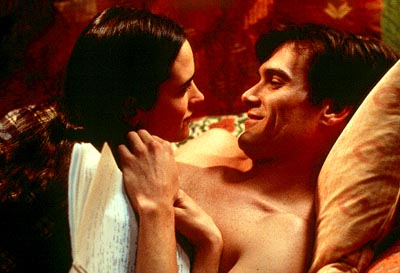 Keith Gordon’s Waking the Dead is like a dorm room bull session, an all-night round of self-righteousness and moralizing, shrilly earnest pontification and wild-eyed statements of purpose. If you’re a participant, these beer-fueled, circular conversations can be among the defining moments of your life. If you’re not, they can sound awfully like two people repeating themselves for hours on end.

Billy Crudup plays Fielding Pierce, the Harvard-educated son of a working class family who has been groomed from birth ("Fielding" is less a child’s name than a declaration of intent) to become a Democratic senator, and eventually the president. In 1972, as he’s finishing a Coast Guard stint, he meets and falls in love with Sarah Williams, a political activist played by Jennifer Connelly. Too much of a sensualist to become a nun as she’d planned, she is now a lay worker in her diocese. She is the very soul of charity and morality, always on the right side of every cause.

His ambition and her purity can’t co-exist. The film depicts their two years together by shifting between endless political arguments (the particulars change, but each boils down to her radicalism vs. his liberal gradualism) and sex scenes (all teary orgasms and whispered endearments). Their conflict is never resolved, as Sarah is killed while smuggling Allende supporters from Pinochet’s Chile in 1974. Billy, distraught, gives himself up to his destiny, dutifully becoming a cog in the Chicago Democratic machine.

When a political scandal leaves a Senate seat open ten years later, Fielding runs as the machine candidate. Just on the brink of fulfilling his ambitions, he becomes obsessed by his memories of Sarah and begins drifting towards madness.

A linear synopsis is misleading, since Waking the Dead juggles its chronology. Sarah’s 1974 death opens the film, then we bounce back and forth between the Senate race and their budding love affair. It’s an odd and intriguing structure (cribbed, one assumes, from The Godfather Part II), intended to illuminate the unexpected ways that past events determine the present. It never quite works, however, because the constant shifts back and forth prevent any real forward momentum. Worse, since the flashbacks are monotonous variations on the same discussion, there’s nothing new to be learned from the repetition. We’re back in that dorm room, hearing the Che Guevera manque railing at the student government policy wonk one more time.

The leads look exactly right. Connelly was born for ponchos and peasant dresses, while Crudup could pass himself off as a Kennedy cousin. Though the script imagines Sarah as a Madonna, too good for this world, Connelly manages to spice her warm, touching performance with hints of arrogance and jarring, prickly intelligence. Crudup is flat but serviceable, more interesting as the earnest young lover than as the compromised politico who dominates the film. Paul Hipp, as his publisher brother Danny, gives an outlandishly histrionic performance, which might be fun if the film didn’t take itself so very seriously. The last thing it’s willing to do is laugh at itself, so his bug-eyed, screaming argument with Fielding plays like a summer stock production of True West. Sandra Oh, Hal Holbrook and Janet McTeer, gifted performers all, barely register in their supporting roles.

No one is helped by the over-written dialogue, which strains for literary effect. "Ambition is the ice on the lake of emotion" would be a bad enough line on the page, but spoken aloud it’s so far removed from even the most rarified conversation it’s laughable. The script (by Robert Dillon, from Scott Spencer’s novel) saves the most thudding lines for its key moments, so again and again we build to emotional peaks that are leveled with off-key, impossible to perform dialogue.

Since we only see Sarah in flashback, and Fielding always has the helmet hair of a machine politician, Danny bears the brunt of signifying each new era. His muttonchops and wide lapels give way to a green leather jacket and spiky new wave ‘do, while his office decor shifts from bean bag chairs to corporate anonymity. The period detail is both garish and obvious. It doesn’t feel lived in – the film has the look of a quickly decorated set. It’s a small distraction, like the synthesizer wash of minor chords that serve as a score, but the lack of attention to these small details conspire to make the film feel inauthentic.

In its attempt to wed wildly disparate genres and tones – to be Vertigo as a political bildungsroman – Waking the Dead is an undeniably ambitious film. It’s a disappointment that the result achieved is a muddle rather than a synthesis. It’s a good story, undermined by its telling.