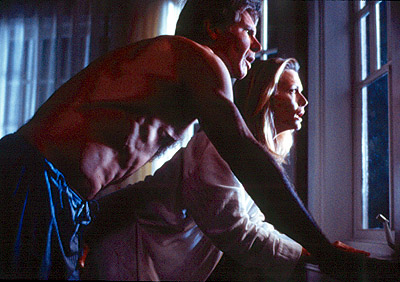 What Lies Beneath, the new Robert Zemeckis supernatural thriller starring Michelle Pfeiffer and Harrison Ford, opens with a literal shock: Pfeiffer nearly lights herself up while messing around with a hairdryer in her steamy bathroom. The accident consists of a few sparks jumping out of a wall-plug, and it&#146;s mainly intended to settle the audience down in its seats &#150; it&#146;s the equivalent of a comedian saying, "I just flew in from Boston and, boy, are my arms tired!" The only problem is that for the next two-plus hours, Beneath does nothing but repeat variations on that pipsqueak little zap. The movie is a series of perfunctory scares suitable mainly for teens who want a reason to grab hold of each other, but from any other perspective it&#146;s a shrill and predictable mess.

Pfeiffer and Ford play Claire and Dr. Norman Spencer, a shining middle-aged couple who have just packed their only child off to college. Norman&#146;s scientific work keeps him busy at the lab, leaving Claire alone for much of the time in their magazine-cover home on the banks of a New England lake. Almost as soon as her daughter leaves home, strange things begin occurring to Claire in her solitude: household appliances take on a mind of their own, spectral whispers fill the house late at night, and she&#146;s plagued by visions of a drowned woman. It&#146;s largely through a series of coincidences that Claire determines that the spirit haunting her is the ghost of a young graduate student whom Norman rejected after a brief affair, and that her husband is hiding more than past love affairs from her. (Why the ghost doesn&#146;t punish Norman directly is anyone&#146;s guess.)

What Lies Beneath is a woman-in-jeopardy TV movie done on a large scale, with rhythms so mechanical that you can see exactly where the networks will be splicing in the Alpo ads a couple of years from now. Clark Gregg&#146;s decaying story draws cliches to it like flies &#150; there&#146;s a wisecracking best friend, a scene-stealing family pooch, and so on &#150; and the movie abounds in clumsy red herrings, such as a next door neighbor who may or may not have murdered his wife. The early hints that the affair stemmed from Norman&#146;s failure to match his father&#146;s academic achievements, and Claire&#146;s resentment over her decision to abandon a musical career for her family, ultimately don&#146;t have any bearing on Beneath&#146;s action &#150; they&#146;re just things the characters talk about in between the ghostly visitations. When Norman admits that he covered up the girl&#146;s death to preserve his professional and family life, and he demands of Claire, "What should I have done?," it&#146;s the only real question anyone asks in the entire movie. Unfortunately, no one associated with the proceedings &#150; not Claire, not Zemeckis, and not Gregg &#150; seems interested in offering an answer.

Zemeckis and Gregg aren&#146;t even interested in the genre they&#146;re working in. They&#146;re indifferent to the things that separate the merely startling from the genuinely scary, and they&#146;ve left untouched nearly all the possibilities for humor in their story. It was ticklish when the mother in Poltergeist responded with delight to the spirits that invaded her kitchen, but Claire Spencer is such an emotional blank that we don&#146;t care how she feels about the front door opening on its own whenever she approaches it. (It&#146;s equally hard to understand why the ghost veers between scaring the bejabbers out of Claire and extending whimsical courtesies to her.)

Zemeckis won a Best Director Oscar for Forrest Gump, but he hasn&#146;t bothered to form even one memorable sequence in What Lies Beneath. For long stretches there&#146;s simply nothing going on, as when Pfeiffer wanders endlessly through the neighbors&#146; yard repeating "Hello? Hello?" in a flat, nasal voice, or when her attempt to unplug the bathtub with her big toe is turned into a labor of Hercules. And for a story that revolves around temptation and infidelity, Beneath&#146;s sense of sexuality is pathetically stunted &#150; Claire&#146;s quick bite on Norman&#146;s lip in the middle of a kiss is made to seem like an exercise in high kink.

The movie&#146;s one surprise lies in its casting of Harrison Ford as a villain, especially one who&#146;s the outsized demon that Norman turns out to be. Ford has specialized in white-bread heroes for so long that it would be lovely if he&#146;d really gone against the grain, but in truth he&#146;s merely traded in one stereotype for another. He&#146;s such a joyless, vacant onscreen presence nowadays that, with several kings&#146; ransoms tucked away in his mattress, it&#146;s hard to understand why he clings to a profession that he openly disparages in interviews. Is it so he can throw himself into lines like, "You know what I&#146;ve got at stake in this paper"? What Lies Beneath might well have been better off had it given James Remar a shot at Dr. Norman Spencer. Remar (he played the homicidal escaped convict in Walter Hill&#146;s 48 Hrs.) looks in fighting trim as the fishy neighbor, and he gives the movie its one macabre jolt when he mocks Claire&#146;s paranoia with a bit of lightning-quick pantomime.

Zemeckis has laced his movie with visual echoes of past thrillers (mainly some Hitchcock pictures), but these mostly serve to make you yearn for a better movie. What Lies Beneath is a picture that got made only because it could get made, and everything in it is spelled out &#150; in some cases, literally. After Claire has learned that the dead woman&#146;s initials were M.E.F., she checks out a missing persons website and, finding the name Madison Elizabeth Frank there, not only touches each initial, but says them out loud in turn. This time around, Zemeckis has made a movie that&#146;s for Forrest Gump.