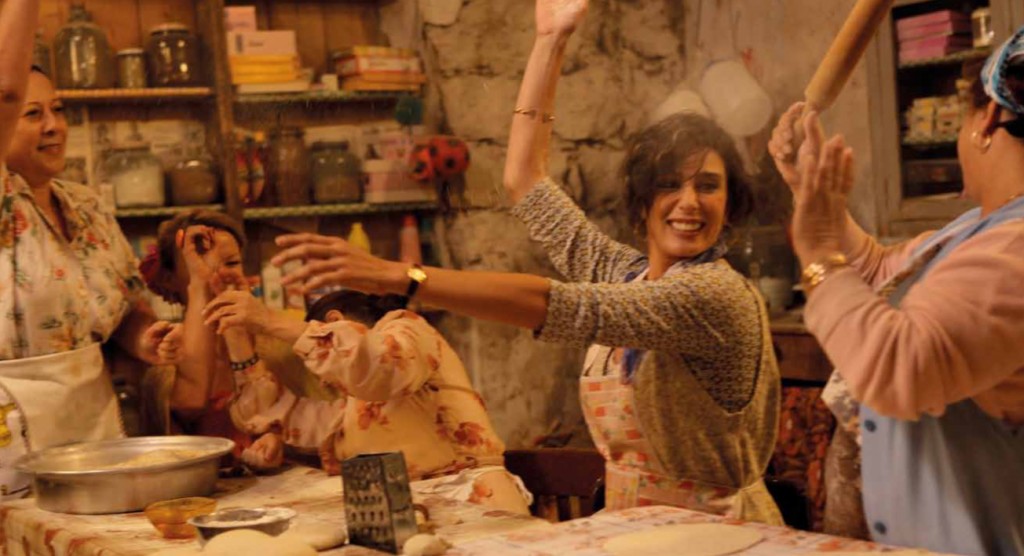 Nadine Labaki starring “Where Do We Go Now?”, a film she also directed and co-wrote

Where Do We Go Now?

One of the more horrifying features of too many recent political crises has been the spectacle of seemingly harmonious communities suddenly dissolving into sectarian violence, pitting neighbors, friends, sometimes even family members against one another. In places like Rwanda and Sarajevo, Baghdad and Beirut, we have watched in disbelief as citizens and neighbors who shared the same schools, the same playgrounds, the same green grocers, turned on one another with a fury that seemed to come from out of nowhere. Such hatreds defy all reason—and seem all the more intractable for it. (They must be ancient and deep, we conclude, imprinted on the DNA of their cultures.) But what if enough people just said . . . enough? Aren’t the bonds of friendship and community stronger than the abstract identities imposed on us by leaders and institutions and history?

These questions are at the heart of Lebanese director Nadine Labaki’s new film, “Where Do We Go Now?”, written in response to the resurgence of sectarian violence in Beirut in 2008, when Labaki learned that she was pregnant. Driven by personal fears to address what could be described as a universal problem, Labaki’s trajectory mirrors her film: a group of Christian and Muslim women in a small and remote village, tired of losing their children to a conflict that has nothing, really, to do with them, says enough. A self-described fairy tale, “Where Do We Go Now?” deftly weaves seemingly disparate cinematic and narrative styles—drama, romantic comedy, pastoral, even the musical—and posits a breathtakingly simple solution.

The story is set in a remote unnamed village (the film was in fact shot in three different villages in Lebanon) presumably some time within the past 30 years. Surrounded by land mines from previous conflicts, accessible only by a narrow bridge, the village is all but completely cut off from the rest of the country. Supplies must be brought in by motorcycle under cover of night, and radio and TV reception are practically nonexistent. The villagers have virtually no access to the outside world.

Although the population of the village is split between Muslims and Christians, the villagers’ interdependence is nearly total. The mosque and church inhabit the same dusty square, essentially next door to one another. The village dead are buried in the same cemetery: one side for Muslims, the other for Christians. The village supports a single café and a single store, both run by women (Labaki plays Amale, the café owner). Indeed, much of the village infrastructure is run by women who have lost their husbands, presumably in war. Yet despite previous hostilities, the villagers seem to have returned to a state of equilibrium. Life goes on much as it always has. When a Muslim farmer’s goat accidentally steps on a land mine, everyone in the village offers their condolences.

The women of the village are determined to preserve this fragile equilibrium at all cost. When news of renewed violence in the world outside begins to trickle in, they resort to increasingly elaborate tactics to ensure their men don’t find out about it. These include staging arguments that drown out radio broadcasts, sabotaging the only TV in town, staging a visitation from the Virgin Mary, and finally orchestrating the breakdown of a tour bus carrying a troupe of Ukrainian exotic dancers (tall, blonde, and scantily clad). The young artistes are forced to stay in the village for a week, ensuring upheaval among the male population. (It sounds ludicrous as a plot device but it works.)

Despite the women’s best efforts, however, news of the growing conflict outside the village breaks through their human shield, inevitably and tragically. What had started out as a lighthearted romp turns deadly serious. With the help of the Ukrainians and some hashish, not to mention the collusion of the village priest and imam (did I mention this story is a fairy tale?), the band of women escalate their campaign to prevent any more fighting.

Like Labaki’s first feature film, “Caramel” (2006), “Where Do We Go Now?” is a “women’s film”—and by that I just mean it is told from a woman’s perspective with a woman’s sensibility. I imagine there will be some (men, mostly) who reject it for this reason. Some may find the film condescending or sexist: its male characters are for the most part simply-drawn and two-dimensional, quick to violence, more comfortable with abstract certainty than nuanced reality, easily intoxicated and easily manipulated. Others will find the film’s evident impatience with religious orthodoxy offensive. There is no arguing with these criticisms. They are to be expected.

Still others may find the film naïve and a little silly. Like the characters it depicts, the feminism of “Where Do We Go Now?” is simple and old fashioned, more common sense than “ism”. But to dismiss the movie as simply old fashioned would be a mistake. Labaki is a talented filmmaker and the movie is sure-footed, even when balancing wildly different emotions and styles. A funeral march early in the movie exemplifies this balance: women in mourning walk in time with the music on the soundtrack to the cemetery, many clutching photographs of dead men. Gradually you realize their gestures are choreographed and the march is in fact a dance number. It is at once beautiful, sad, exhilarating . . . pure cinema. The soundtrack, art direction, costume design, and cinematography are also pitch perfect.

For all the pains she may have taken to define this movie as a fairy tale, the emotional reality of “Where Do We Go Now? feels authentic and true, especially the devastating depiction of maternal love and loss. As a woman, I found the narrative point of view refreshingly honest. When the village farm animals find their way into the mosque (signaled by bleats comically amplified over the muezzin’s loudspeaker), the Muslim men naturally blame the Christian men, just as the Christians had blamed the Muslims when the church crucifix was found broken. An inevitable fight erupts in a flash and then dissipates just as quickly. The camera lingers, however, on the Muslim women who are left to clean up the mess in the mosque on hands and knees, long after the glories of confrontation are past.

What ultimately distinguishes “Where Do We Go Now?” is its humanity. The women are funny, honest, impatient, and flawed. They gossip and tease; they grow fat as they get older. They cling to their sons, whom they fear they will lose. They possess dignity and strength. Even the Ukrainian strippers, easily caricatured, are depicted with surprising sympathy and respect. (I really didn’t expect that.) As for the men, they are simple, it’s true, and easily led, but they’re neither ridiculous nor unsympathetic. What could easily be defined as “blood hatred,” the film suggests, is just anger channeled in age-old, predictable ways. It’s not imprinted on anyone’s DNA, just a function of institutionalized resentment and testosterone. To some people, of course, this might seem impossibly naïve-such hatreds have been nurtured for centuries, after all. And yet. Just imagine what the world would be like if everybody looked at their neighbors this way.