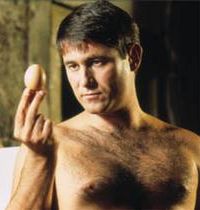 On its surface Dominik Moll&#146;s With A Friend Like Harry looks like a European cousin of those lover/housemate/babysitter-from-Hell movies that took over Hollywood in the early &#146;90s, in which a malignant sociopath would enter the lives of normal people and then knock them about like tenpins. But Harry doesn&#146;t take its cues from those rotten Rebecca DeMornay vehicles in which the heroes are guiltless golden yuppies and the filmmaking is as subtle as a meat axe. The husband-and-wife twosome that falls prey to Harry&#146;s nut-case are, despite their good looks, emotional and financial weaklings who feel overwhelmed by life, and at Harry&#146;s best Moll picks apart their lives with the cold but toothy satisfaction of a young Roman Polanski.

On a scorching summer&#146;s day, Michel (Laurent Lucas), a 30-something Parisian language teacher, his wife Claire (Mathilde Seigner, sister of actress Emmanuelle Seigner), and their three young daughters are sharing a miserable drive in their overheated car to the country home that they spend their weekends renovating. In a gas station restroom along the way, Michel encounters a limpid, open-faced man, Harry Ballestero (Spanish actor Sergi Lopez), who claims to have been Michel&#146;s classmate when they were boys. Harry&#146;s financial ease and worldly manner offset his spacey demeanor; his charm and intelligence make it easy for him to attach himself to the couple. His girlfriend and traveling companion, the plushly equipped Plum (Sophie Guillemin), is as dumb as a cow, but she&#146;s also a goodhearted libertine; she and Harry, with their relaxed outlooks and unabashed sexual appetites (Harry likes to suck raw eggs after every orgasm), are Michel and Claire&#146;s polar opposites. They accompany the couple to their remote country house, which with its unheated rooms and grumbling pipes, resembles a barn more than a home. The dilapidated structure, a symbol of Michel and Claire&#146;s precarious hold on their future, is the setting for much of With A Friend Like Harry&#146;s action.

Harry quickly shows that he&#146;s privy to sides of Michel&#146;s personality from which Claire has been shut out; he knows, for instance, that Michel once dreamed of being a writer, and he can still recite from memory a long poem that Michel wrote back in high school. Michel listens to his old verse with something darker than mixed feelings. He&#146;s seething with resentment against the domesticated path his life has taken; he sees himself as a free spirit now drowning under a wave of convention. His wife and children provide a heavy enough anchor, but he&#146;s also weighed down by his parents&#146; constant meddling in his life, and worst of all he&#146;s paralyzed, incapable of saving himself. (His parents&#146; latest intrusion is a misguided transformation of the house&#146;s bathroom into a fuchsia-toned nightmare.) Step by step, Harry worms his way first into Michel&#146;s mind, and then into his life, by leveraging his friend&#146;s rage and shame. Harry offers advice, money, even a brand new SUV, without asking anything in return. Yet there&#146;s the devil&#146;s own catch to his generosity: he might want to liberate Michel from the forces that are holding him down, but some of those forces are alive and human.

Tonally With A Friend Like Harry calls to mind the 1988 The Vanishing, but it may not enjoy the shelf-life of George Sluizer&#146;s cult classic because Moll and his co-screenwriter Gilles Marchand fail to deliver a plausible explanation for Harry&#146;s motives. (Marchand also co-wrote, and Moll was assistant director of, the marvelous 1999film, Human Resources.) Though it&#146;s implied early on that Harry may be nursing a grudge or crush from his boyhood, it&#146;s hard not to see him as a an alter-ego that Michel has conjured up from his subconscious to sabotage the domestic drudgery that his life has become. How else to explain things like the dream-like moment in which Michel first spots Harry, poised before the restroom sink, his hands drooping before him like a pair of tired fins? But the movie scarcely raises the possibility, leaving more literal-minded viewers with the ersatz Nietzschean guff&#151;&#147;Excess is the way to fulfillment&#148; is an example&#151;that Harry offers to justify his actions. The movie&#146;s ideas grow drier and more remote just when we want them to become riper and more compelling; its perfunctory climax falls upon us before we&#146;ve come to understand what&#146;s really at stake in the conflict between the two men.

These are serious complaints, and yet Harry is well worth seeing, especially for the atmosphere and dark comedy of its first hour. Moll knows how to evoke tension from the commonplace, and in the opening scene he conveys the depths of Michel&#146;s rage with a simple backseat view of his tension-wracked neck and shoulders as he sits mired in the environment&#151;the crummy car, the heat, the little girls&#146; squalling&#151;that threatens his sanity. Elsewhere, layers of other noises&#151;rattling pipes, or the wind&#151;communicate emotion so effectively that it&#146;s hard to remember after the movie&#146;s over whether it even had any music in it. There are moments of whimsy, such as Michel&#146;s surrealistic monkey dream, and naturalistic nuggets, such as the stares of scarcely disguised dismay that Harry and Plum cast about Michel and Claire&#146;s primitive kitchen. And though the women are underused, the acting by all four principals&#151;especially Lopez as the disarming, deadly Harry&#151;is splendid. Fluid, intelligent, and often quite funny, With A Friend Like Harry has everything but a point to it.