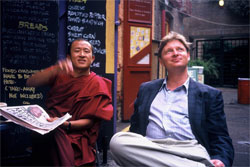 Buddhism is a strange religion to us Westerners. Buddhists do not have a God, nor do they have the consolation prize of life after death. They do believe in reincarnation, though it’s more like a necessary pit stop than a key to immortality. Without a supreme being or an afterlife to console them, Buddhists focus on this life as the way to reach Nirvana, their own version of heaven. The path to Nirvana involves a spiritual journey of discovery that leads to enlightenment. And all that Buddhists have to guide them in this journey are spiritual teachers, or lamas, all of whom are emphatically quite human.

One such lama is the subject of Lesley Ann Patten’s irreverent documentary, “Words of My Perfect Teacher.” He is Dzongsar Jamyang Khyentse Rinpoche, or Khyentse Norbu (hereafter called Rinpoche) a Bhutanese monk, born in 1961 and designated a “tulku” at the age of seven, which means he is recognized as the reincarnation of the previous tulku of the Khyentse lineage of Tibetan Buddhism. (Enlightened ones, or buddhas, choose to reincarnate as a way to pass on their teachings.) Without going into what lineages are, this Rinpoche is a big deal, third in line to the Dalai Lama, and his guidance is sought after by Buddhists around the world. He is about as close to a God as Buddhists will ever get.

But as Rinpoche himself would freely admit, and Ms. Patten never lets us forget in her documentary, this Bhuddhist teacher is about as godlike as an employee at your local video store. And he seems to relish going against the image of what a Buddha should act like. In this documentary anyway, he’s frustratingly illusive, and when he does allow access, he often seems to be mocking the filmmakers. He invites them to attend a World Cup soccer match, and then leaves Patten and her film crew stranded at the airport. He doesn’t return phone calls, and his interviews are more amusing than enlightening. In fact, most of the footage is of Patten and her crew following Rinpoche around like a dutiful entourage who haven’t a clue why they’re following him or where they’re going.

It doesn’t help his image as a reincarnated tulku that Rinpoche himself has filmmaking aspirations of his own. His 1999 film “The Cup,” about soccer fanatics at a Bhutanese monastery, was a modest critical and commercial success. He followed that with a similar-themed documentary in 2004, “Travelers and Magicians.”

If Rinpoche seems an unlikely spiritual leader, the motley crew Patten has picked to be his followers is even more peculiar. There’s Patten herself, an odd mix of neuroses and ambition, whose drive to make this documentary seems to be coming less from a desire to seek enlightenment and more a desire to make a funny art house hit. (Frankly, with the kind of footage Patten has to work with, funny was definitely the way to go.)

There’s also Luc Dierkx, the Canadian computer geek who oscillates between astonishment at his good fortune to be a part of the film, and therefore close to his guru, and frustration at Rinpoche for not acting like one. The film’s other disciple is Louise Rood, a young English woman whose own spiritual background is limited to tarot card reading, and the sage advice of her own very wise Aunt Shirley. (“Aunt Shirley has told me exactly what Rinpoche has told me,” she admits in a moment of wisdom of her own.) Rood and Dierkx are the Mutt and Jeff of Buddhism’s western practitioners. There is humor in Patten’s choices here, but also an acknowledgment of the very unorthodox appearance of Buddhism’s westernized converts.

While Patten waits for signs from Rinpoche to reappear, she turns her attention to two other supposed Buddhist tulkus, one of whom, Gesar Mukpo, is a twentysomething Angeleno who would rather play basketball than follow the Noble Eightfold Path, and who has decided to sell his title on eBay. The other is the actor Steven Seagal. At one point, Patten places her interviews with these two men in split screen in an enlightened bit of editing. Seagal’s pomposity is shown alongside Mukpo’s youthful candor, and Mukpo ends up looking like the more enlightened one. It is to Patten’s credit that she not only lays bare these embarrassing offshoots of Buddhist culture, but does so with a bold sense of humor. She seems to be following Rinpoche’s own advice at the beginning of the film, when he says enlightenment is letting go of hang-ups, inhibitions, and other people’s expectations. Much like Rinpoche has let go of what others expect a Buddhist leader to be like, Patten’s documentary is her own way of letting go of what others expect a documentary about Buddhism to be like.

The documentary dispenses with some of its mocking (and self-mocking) tone when the film crew arrives in Bhutan to visit Rinpoche at his monastery. And Rinpoche seems to shift into a more serious version of himself as he performs the duties of his title, which seem heavy responsibilities when we see the hundreds of his Bhutanese followers bowing in reverence before him. In these scenes, Rinpoche is more generous to Patten and her crew, and he talks with some real feeling about the ascetic life he lived as a child being prepared to fulfill his role as a tulku.

Towards the film’s end, after a festive meal at a Bhutanese leader’s home, a slightly inebriated Rinpoche recites a Buddhist prayer in which Siddhartha, the first Buddha, is praised for not having chosen to become immortal once he died. As Rinpoche recites the prayer, he ever so slightly looks at the camera with a gleam in his eye. It’s as if he is reminding us of a basic belief in Buddhist philosophy—that death, like all human suffering, is something we cannot eliminate from existence. All we can strive for is to eliminate the desire to eliminate death and suffering. That’s not the message that most of us Westerners are used to hearing from our religion. Rinpoche knows that, and that glint in his eye is telling us that he knows that. As a Buddhist, however, he is a patient teacher, not versed in the ways of conversion. And there is, after all, always the next life, if we don’t quite get it in this one.

It’s refreshing that Patten is not trying to convert us either. And yet, in a funny way, this amusing and at times derogatory portrait of Rinpoche made me feel drawn to the Buddhist way. I have felt calmer lately, more accepting. Maybe I should go on eBay and check out the bidding for that tulku title.

(20901)
$7.99 (as of January 25, 2021 - More infoProduct prices and availability are accurate as of the date/time indicated and are subject to change. Any price and availability information displayed on [relevant Amazon Site(s), as applicable] at the time of purchase will apply to the purchase of this product.)

(2350)
$8.15 (as of January 25, 2021 - More infoProduct prices and availability are accurate as of the date/time indicated and are subject to change. Any price and availability information displayed on [relevant Amazon Site(s), as applicable] at the time of purchase will apply to the purchase of this product.)

(10952)
$4.79 (as of January 25, 2021 - More infoProduct prices and availability are accurate as of the date/time indicated and are subject to change. Any price and availability information displayed on [relevant Amazon Site(s), as applicable] at the time of purchase will apply to the purchase of this product.)
related posts