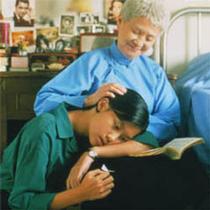 The critic William Pechter once wrote this about Sam Peckinpah’s Junior Bonner:

Nothing much happens, except that some people, the place they inhabit, and the quality of their lives are brought vividly before us. Which is to say that everything happens. At the end, as in a good novel, one feels one has known and lived with some people through a time in their lives whose moments crystallize into a definition of who and what those people are.

This passage captures that film perfectly. It also serves as a precise description of both the ambitions and the achievement of Edward Yang’s new Yi Yi (A One and a Two).

Yi Yi doesn’t seem promising. A three hour long domestic comedy about the travails of an extended family in Taipei, it sounds less like entertainment than punishment. Yet it’s anything but tedious: observant, beautifully acted (largely by newcomers and semi-professionals), at turns funny and harrowing, it may well be the best film released this year.

Yi Yi opens with a wedding. A-Di (Chen Xisheng), a brash, irresponsible man in early middle age is marrying Xiao Yan (Xiao Shushen), who’s now visibly pregnant. A-Di has delayed the wedding for months to ensure that it would fall on a lucky day, without considering his wife’s embarrassment. Most of the family takes his behavior in stride, though his elderly mother (Tang Ruyun) is mortified, sitting alone and silent throughout the ceremony. She’s eventually joined by A-Di’s old girlfriend Yun-Yun (Zeng Xinyi), who, in an astonishing act of passive aggression, makes a horrible scene by loudly apologizing to her for not being A-Di’s bride that day. She’s dragged out, screaming, and the old woman collapses with a stroke.

What reads like an audacious, melodramatic beginning is instead played for dry laughter. Like Ozu, the filmmaker whom he most resembles in temperament, Yang is drawn more to incident than plot. He tells his story in the margins, with many of the story’s crucial events occurring offscreen. He instead shows us the texture of everyday life, the editing paced to let us soak in the details that crowd the frame. From the film’s first images – the family posing stiffly for wedding portraits, all shot from slightly tipped angles and held a beat longer than we’d normally expect – Yang shows us something we think we’ve seen before, but from an odd perspective that forces us to realize that we’ve never really taken the time to examine it. It’s an unhurried, elliptical style, unfolding deliberately and gaining enormous emotional force over time. By film’s end, the minute changes in the family’s life – small realizations they’ve had about their lives, compromises they’ve accepted – are overpowering.

After the wedding, A-Di’s sister Min-Min (Elaine Jin) takes in the old woman, who’s now in a coma. As each member of her family takes turns talking to her, we come to realize that for all their seeming stability and prosperity, they have all reached points of impasse. Min-Min’s husband NJ (Wu Nienjen), an engineer who’s growing tired of his company’s mediocrity, has chanced upon his first lover (Ke Suyun) at A-Di’s wedding. He takes a stab at rewooing her while simultaneously pursuing a business relationship with a visionary Japanese inventor (Issey Ogata). Min-Min herself catches a glimpse of the emptiness of her life and retreats to a monastery to study with a spiritual leader. And her children – teenage daughter Ting-Ting (Kelly Lee) and young son Yang-Yang (Jonathan Chang) – take their first stumbling steps towards love.

Yang tells each story economically, using the similarities in each separate tale to broaden their meanings. This never announces itself as a strategy; it’s only after taking in the whole film that one begins to reflect on how each section expands from that which preceded it, slowly gathering momentum over time.

It’s easy to miss the deftness of Yang’s approach: like Ozu and Renoir, his style is so rooted in the everyday that on first look it may seem mundane. In a year where ambitious work has announced itself as such (in the dizzying, off-kilter rhythms of Dancer in the Dark or the take-it-or-leave-it audacity of Dr. T and the Women), the deceptive modesty of Yi-Yi may make it seem slight. It isn’t. Yang has made a film that bears comparison with his role models. Since he draws from the best that cinema has to offer, there is no higher praise than that.