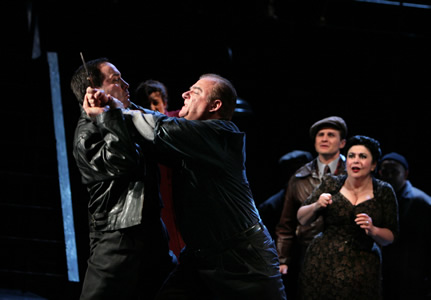 A View from the Bridge with music by William Bolcom and libretto by Arnold Weinstein and Arthur Miller is a powerful opera about Italian immigrants to the United States in the 1950s. Based on Arthur’s Miller’s play by the same name, the operatic team produced a compelling work that is enjoying its seventh production by Washington National Opera under the stage direction of Amy Hutchison and musical direction of John DeMain. Dramatically, this opera puts the subject of immigration to the United States and hate in front of audiences who now consider the topic of immigration as important as the war in Iraq, health care, the economy, and terrorism.

The story, which unfolds in two acts and a run time of about two hours not including the intermission, concerns Eddie and his wife Bea who have raised Bea’s sister’s daughter Catherine. As the story opens, Catherine announces she has a pending job offer that will take her away from her high school studies. This upsets Eddie who insists that he is responsible for Catherine’s welfare. Also the family is awaiting the arrival of Bea’s cousins Marco and Rodolfo who are entering New York as illegal immigrants. As the story progresses, Catherine and Rodolfo fall in love much to the jealous rage of Eddie. By the end of the opera, Eddie has crossed the line by alerting Immigration officials about the cousins, threatening Bea that he will throw her out of their home if she attends the wedding of Catherine and Rodolfo, and finally having his own knife turned on himself in a fight with the desperate Marco who is being sent back to his starving wife and children in Sicily where there are no jobs.

Eddie’s lawyer friend Alfieri (played by John Del Carlo) narrates the story and is backed by a large chorus operating in the tradition of the Greek Chorus. What makes this verismo story exceptionally compelling is that the audience knows from the beginning of the opera that Eddie will commit an unforgivable act against his family that will make him an outcast in his Brooklyn community.

The cast includes Kim Josephson as Eddie, Catherine Malfitano as Bea, and Gregory Turay as Rodolfo. All three of these lead singers appeared in the premiere production in 1999 by the Lyric Opera of Chicago. In the WNO opening night performance November 5th, these masterful singers proved to be at the top of their game, but so were others like Richard Bernstein as Marco. Particularly impressive is the overall performance of soprano Catherine Malfitano whose music with atonal shading is probably the most difficult portion of this mostly lyric opera. Memorable performances include tenor Gregory Turay’s delivery of the ballad “I love the beauty of the view at home” and bass-baritone Richard Bernstein’s emotionally loaded delivery of “Eddie Carbone!”

The music of A View from the Bridge has a richness built on brass instrumentation that this reviewer finds unusual. Notably, the lyrically pleasing second act intermezzo enjoys this kind of brass underpinning. Bolcolm stated in a conversation with Roger Pines in March 1999 that he “wanted the major characters to have tunes with the same accessibility that a good Broadway tune had.” He achieves this with such music that includes barbershop quartet and Rodolpho’s Italian-shaded American jazz version of the pre-existing popular song “Paper Doll.”

The combined artistry of set designer Santa Loquasto and projection designer Wendall K. Harrington adds a striking somberness to the landscape of this impressive opera.

The only complaint this reviewer has is that Act I would benefit from some judicious cutting. Nonetheless, A View from the Bridge is an important and moving contribution to contemporary operatic repertory.