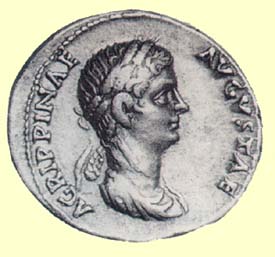 Agrippina was only Handel’s third full-length opera. Composed for the sophisticated opera audience of Venice at the end of Handel’s five years’ stay in Italy, it is clear that his talent has matured from his early German efforts in the form. The plot is more elaborate, more play-like, than in many of the later, statelier works Handel devised for the London stage – in Venice, after all,  the audience could follow the dialogue and appreciate nuances of character in a syllable or an aside. Performers had to act as well as sing. The melodies have a light, dancing, mocking quality, and the plot is almost buffo – with the telling intrusion of one sincere character, Ottone, whose genuine feelings make him the victim of all the others, hence, for us, the emotional center of the piece.
This sophistication goes over well in our cynical age – Agrippina has been one of the most popular stage works of the great Handel revival. It succeeds for the same reasons it could never have been presented at a monarch’s court: the cheerful hypocrisy of almost the entire cast of regal politicians, the ease with which they conceal their true interests with exalted sentiments and change their tune to suit altered circumstances, would have cut a little too close to the bone at a court. They would do so still, if they weren’t so funny about it.
Though all the characters (except a comic servant) are based on historical figures, the story owes more to farce than to epic. Claudio, Emperor of Rome, has been saved from drowning by the gallant Ottone, whom he has decided to name as his heir in reward. His wife, Agrippina, who hopes to place her own son, Nerone, on the throne, has one trick up her sleeve: she knows that both Claudio and Ottone are in love with Poppaea, whom she tricks into arousing Claudio’s jealousy. But Agrippina does not realize that her son also loves Poppaea. Eventually there is a bedroom scene with Poppaea playing off the passions of all three of her lovers, hidden in various parts of the room. At last Claudio and Nerone both decide that Poppaea is not worth the turmoil she can cause in their hearts – their real passion is power. Poppaea and Ottone are united, and the succession is settled to the satisfaction of the manipulative and amoral Agrippina, whom Claudio honors by founding a new city: Colonia Agrippinensis, that is, Cologne.
This film of the work comes from the Schwetzingen Festival, held in the theater of a rococo palace near Heidelberg. The handsome sets and costumes are of the Napoleonic era, which does not work at all badly for Ancient Rome – the French Revolutionaries consciously imitated Brutus and company, in style as in deeds. The staging is very elegant and colorful, and the singers act their roles splendidly. The performance dates from 1985, however, in a style of Handelian performance that was, musically, on the way out, and will strike the aficionado today as very odd indeed. All the men’s roles, three of which were composed for male altos, are transposed for tenors and basses. (The one part actually composed for a bass is the burlesque grandiloquence of the Emperor.) The singing is adept, the orchestration appropriate (lutes and all), but the voices are not ideally agile for this music. Too, the production was created with speed of delivery in mind: da capo repeats are often omitted or abbreviated, and even the B sections of arias frequently bite the dust. With so delicious a score, this seems an unfortunate set of choices, but there is no doubt it results in a swift-moving show.
Arnold Ostman conducted, Michael Hampe directed, and Thomas Olofsson directed the video, in a way that makes the action clear and gives tableaus and intimacies their due. The one serious annoyance given by this production is that at no time, on either the tape or the box it comes in, is the cast listed. One can guess that Barbara Daniels sings Agrippina and Janice Hall is Poppaea, since they are the only female singers mentioned, but it could be the other way around. In any case, Agrippina, all smiles and cruel asides, rightly holds center stage here, and Poppaea is sexy without being vulgar, and only has trouble with ornament and intonation in some of her slower and lower arias. Gunter von Kannen and David Kübler are also mentioned, perhaps as the singers of Ottone and Claudio, but one of them might be Nerone. The Ottone has some heavy weather with the more extended coloratura written for an alto, but he looks distinguished. Claudio is very funny, a sort of Oliver Hardy as Emperor, and Nerone does the simpering fool to perfection but sings with a dry tenor. There is no indication at all of who plays the ministers (got up to resemble Murat and Talleyrand) whom Agrippina hoodwinks, or the charming comic servant. Did the producer lose the cast list and assume no one would notice? There must have been room on the tape for this information – an awful lot of time is spent dwelling on the plush German audience as they traipse about the chateau and its gardens before tcould easily have been inserted here or there.
– John Yohalem