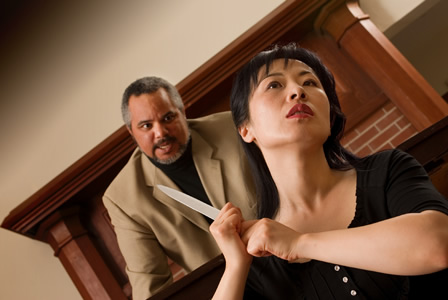 The Baths of Caracalla it ain’t and that’s for sure. If the question was “how on earth could Berkeley Opera put on a grand scale production like ‘Aida’ in the small, intimate Julia Morgan Theater,” the answer is: “rather cleverly.” Director Yuval Sharon, along with artistic director/conductor Jonathan Khuner, has inventively re-imagined Verdi’s Egyptian extravaganza, setting it in the contemporary sitting room of a nameless totalitarian regime. (The torture and execution chambers are in a loft, upstairs). In his hands, the piece ceases to be a spectacle and becomes a vivid and timely anti-war statement – as well as the tale of the love triangle that always has been at its heart.

Sometimes, there is a little too much going on, especially at the end when terrorists burst into the palace and begin murdering the royal household during “O terra addio,” the exquisite duet in which the doomed hero and heroine say their farewells to the world. There is a nice irony as the spurned princess, Amneris sits at the table below, oblivious to the bloodbath around her, and prays for peace but the music suffers to make the point. Sharon might do well to recall the maxim that, in art anyway, less can be more.

There certainly is less in the grand Act Two triumphal scene, which Sharon has choreographed as a televised press conference with the royals. With the chorus singing offstage, we watch the TV monitor as Charlotte Khuner, 11, merrily bourees across the stage while inflicting mortal damage upon her stuffed doll. Young Charlotte is not the only sight gag in this scene. Actually, I never remember laughing out loud (or at all) in a performance of “Aida” but this one has a few really funny moments. Some of the laughter, however, is simply embarrassed as in the previous scene, in which the princess gets a pedicure while the High Priest and Priestess get it on, doggie style, in the loft above. Not one of Sharon’s finest moments. A real dog, squirming in the princess’ arms during several of her biggest arias, is another distracting mistake.

There is one absolute standout in the cast. Jennifer Roderer is a magnificent Amneris, strong of voice and projecting both the imperious princess’ raging jealousy and pitiful humanity. Worthy of a larger venue and stronger cast, one wonders why she took this gig anyway. Everyone else is adequate but she is superb. Kevin Courtemanche sings the role of the warrior Radames with skill and a few wobbles at the top (particularly the last note of his big number, “Celeste Aida,” on opening night) but his acting is wooden and Sharon has given him some stage business that makes him seem more of a petulant little boy rather than a hero beloved by two different women. Juyeon Song (nice last name for an opera singer) is good in the title role but there is little chemistry between her and Courtemanche. The famed Act Three Nile Scene (kind of hard to do without the river setting) brings her more alive in interaction with her father, the enemy king. This role, Amonasro, benefits greatly from the strong voice and even stronger acting skills of Jo Vincent Parks.

William Pickersgill, a powerful basso, is the autocratic High Priest, made to seem like a power-behind-the-throne of Paul Cheak, the King (you are free to draw your own political parallels here) and Margaret Valeriano has a lovely moment as the High Priestess. Members of the University of California Alumni Chorus, backstage until the curtain call, performed well – with a few late entrances – as did the orchestra, under Maestro Khuner. This “Aida” gets high marks for imagination, medium marks for musicality. If you or your companion have a tendency – as most of us do – to nod off during a long opera, forget it. With never a dull moment, Sharon’s staging will keep you on your toes for the full three hours. It falls squarely into the category of a director’s show.