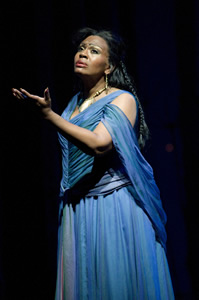 The inventors of opera had theories and rules. Opera should be about Greek gods and goddesses, and have a moral. Monteverdi broke these rules set down by the Florentine Camerata in 1573 when he wrote L’Incoronazione Di Poppea ( 1647 ) which replaced these deities with the amoral Nero and his equally amoral queen to be. And though Nero and Poppea were recognizably human, they still had Fortune, Virtue, and Love waiting in the wings. But when Verdi wrote his 3oth opera, Aïda, in 1870, no such help was around. His hero and heroine had to go it alone. And that’s what makes this “grandest of all operas” as existential as Tristan (1857-59), and far more powerful and touching. Why? Because the Italian master never goes on tedious tangents like Wagner, whom Virgil Thomson, quoting a German critic, said, went “ around the mountain and through the woman. “ Verdi’s music, though it doesn’t lack subtlety – far from it – cuts to the chase, and goes straight to the heart. And it’s the physical directness of Aïda which makes it so thrilling and moving.

Seattle Opera’s new production – I caught the 9th of 11 performances – honored these affects. But no production of Aïda will fly if the singing actors don’t deliver, and this one was blessed with 3 who did – soprano Lisa Daltirus as the Ethiopian princess / slave, tenor Antonello Palombi as her captain of the guard lover Radames, and mezzo Stephanie Blythe as Pharoah’s daughter and rival for Radames’s hand, Amneris.

Daltirus, who’s sung Aïda a many times, made her remarkably vivid, and it certainly doesn’t hurt that she’s quite beautiful, and has a powerful stage presence. Her aria “ O patria mia “ was perfectly balanced yet full of longing for her homeland, and her Nile scene was as poetic as Michael Yeargan’s set with its midnight blue flecked sky aided and abetted by Robert Wierzel’s expert lighting design. Palombi’s Radames was solid – he hit the notes alright in his opening scene with the high priest Ramifis ( the imposing Luiz_Ottavio Faria ) but mostly undistinguished , and sometimes sounded like he was channeling Pavarotti. But he was every bit the doomed hero in Act IV’s concluding tomb scene with an equally moving Daltirus. And then there was Blythe –she seems to have taken Seattle by storm – who invested her part with lots of nuance, pliant and secure in all registers, especially the lowest one, which brought to mind the rock solid gravitas of Marilyn Horne in her glory days. But Peter J. Hall’s costume designs tended to undermine her – she’s a big girl – especially at the beginning of Act II – where her voluminous turquoise and coral frock, and the gestures director RobinGuarino gave her, made her look like Jabba the Hut. The ancillary roles were also very well sung, especially that of Aida’s father, the Ethiopian king Amonasro , which baritone Charles Taylor made both sexy and touching. Chorusmaster – mistress ? – Beth Kirchhoff – got wonderfully blended sounds from her chorus, in the big numbers like the Triumphal March , which got lots of punch from the 4 gleaming trumpets, positioned in pairs above right and left first boxes, and in the intimate ones as well.

Guarino’s traditional staging was direct, but not especially fresh, though the strong clear gestures she gave Blythe in Act IV communicated all they needed to, and Yeargan’s designs were consistently evocative and striking, especially the repeating hieroglyphic wall patterns in the Temple of Justice, and the map of the model soldiers in Act I, faced the audience at one point, thereby suggesting the planned horrors of war.

“ Let there be peace “ Amneris implored arms outstretched. And then the curtain calls began, with Italian not yet 37 year old conductor Riccardo Frizza—this was his company debut – taking the last, but certainly not least, bow. His utterly clear and urgent reading seemed both urgent and completely in the moment – he cued and caressed his singers from the pit – and his orchestra responded in kind with pungent carefully balanced sounds. There’s a reason people respond to warhorses like Aïda. And it isn’t because, as my dear late friend Danny Cariaga, music critic extraordinaire, quipped fresh from a Verdi rehearsal,” because you like commas. “

(15751)
$3.14 (as of January 23, 2021 - More infoProduct prices and availability are accurate as of the date/time indicated and are subject to change. Any price and availability information displayed on [relevant Amazon Site(s), as applicable] at the time of purchase will apply to the purchase of this product.)
related posts