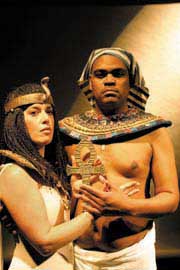 Opera has from the very beginning focussed on myth and ritual. So Philip Glass’ three act Akhnaten (1984), which was seen as an oddity by some at its Stuttgart premiere–one critic called it Requiem for an Earwig–or, at the very least, an unusual dish on a repertory menu, actually fits perfectly into this purview. The opera’s character is entirely ritualistic and hieratic. The Florentine Camerata,who invented opera, were in agreement on the form’s mythic dimensions. And the first great composers of this new genre were of like mind on this, as were subsequent composers like Gluck, Handel, and Mozart, especially in his opera seria La Clemenza di Tito (1791).

Wagner, ever a law unto himself, saw his work as continuing that of the Greeks. Glass’ Akhnaten would have fitted perfectly into this argument if he hadn’t abandoned the Oedipus-Jocasta story in favor of that of "the heretic king" of Egypt alone. And though critic Andrew Porter thought that its subject was something Meyerbeer could have set, David Freeman’s 1984 production at the New York City Opera couldn’t have been less 19th century in look or feel. Glass’ approach here is not unlike that used by Sch�nberg in Moses und Aron (1930-32), and Stravinsky in Oedipus Rex (1926-27), though an even stronger parallel is his Les Noces (1914-17), with its thoroughgoing use of "primitive” repetitive gestures.

Glass manages to make Akhnaten both forbidding and strangely engaging. Why strangely? Because he and his co-librettists Shalom Goldman, Robert Israel and Richard Riddell have used Egyptian, Akkadian, and Hebrew texts, which communicate vividly as pure sound while keeping their impenetrability intact. Would that they were aided and abetted by a director of similar theatrical instincts. But Ellen Sebastian Chang, who’s done highly regarded work in spoken word theatre, hasn’t made a viable entree into the lyric one.You don’t go to an opera set in 14th Century BC Egypt to see people in 21st century AD American street clothes. Well, Sebastian Chang, apparently does. Yet her conceit of capitalist tourists stumbling into ancient Egypt is often like an unholy alliance between Marvel Comics and The Mummy. But the singers and Deirdre McClure’s eleven-piece above-the-stage band (it’s usually done with forces numbering about 50) projected the theatrical juice and mystery in this dramma per musica, for Glass, like opera’s inventors, moves his piece through a varied series of orchestral/vocal textures, which complement, yet are all of a piece.

The prelude, which was played as the audience entered the theatre, has a starkness worthy of Satie, while the subsequent funeral of Akhnaten’s father Amenhotep III, would have had a lot more punch if the director had followed the libretto: "The funeral cortege enters downstage led by two drummers (playing Tom-Toms)."

But some of her solutions in other places were entirely apt. Countertenor Paul Flight (Akhnaten) sits alone in his throne singing his "Hymn to the Sun," and "The Window of Appearances" showed him, his mother Queen Tye (soprano Angela Dean-Bonham), and his queen Nefertiti (mezzo Darla Wigginton) in carefully calibrated poses, as Glass’ serenely sad music emerged from them. And what amounted to a coup de theatre occurred in the third act’s "Attack and Fall" where a trio comprised of bass John Minagro (Aye), Martin Bell (Horemhab), and lyric tenor Alan Cochran (Amon High Priest) launch into a rhythmically feverish and pitch perfect assault on the king in Akkadian after reading similar texts in English. This also served to point up the highly emotive differences between speech and song which color this unique and powerful work, which has narration spoken in the language of the audience by the Scribe (Michael Mohammed).

Akhnaten’s imposition of the worship of his one god, the Aten, on Egyptian’s poytheistic society troubled them no end–and not just the priests, who had a cash cow in the rites performed for their principal deity, Amon. Akhnaten was overthrown and his newly built capital, Akhetaten, destroyed. Glass’ version of the story places the listener in an alien yet fascinating world, full of beautiful colors, especially in the winds–bass clarinet, flute, and brass–and powerful rhythms. It draws us in, yet keeps its distance. The ambivalence is intentional, and deeply moving too. While this production could have been more suitably directed, it did have the virtue of introducing a musically sophisticated and imposing work to a curious audience.