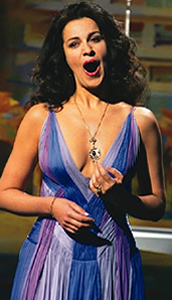 It was a concert. It was a love-fest. It was a fashion show. Soprano Angela Gheorghiu may have come to San Francisco rather late in her superstar career but it looks like she’s come to stay. The Romanian diva bowed here in last season’s “La Rondine” and returned as a 2008-9 season appetizer co-sponsored by the opera and Cal Performances. And let me say a few words about that collaboration. David Gockley is some kind of genius. By stretching the opera’s arm across the Bay Bridge, he increases his fan base and provides himself with a venue when the opera house is otherwise engaged, as in the case of last season’s “The Little Prince.” Zellerbach Hall in Berkeley provides a more intimate setting for recital and chamber opera than the cavernous War Memorial Opera House. The next such presentation will be “Dead Man Walking” composer Jake Heggie’s new “Three Decembers,” with Fredericka von Stade, scheduled for – of course — December. Bravo to both Gockley and Cal Performances Robert Cole for an innovative idea that extends the influence of the arts in the Bay Area.

Now back to Gheorghiu. Drop dead gorgeous and wearing no less than three different gowns, she delivered a program that was short on content but long on charisma, ably backed up by the full San Francisco Opera orchestra, conducted by Marco Armiliato, who will helm this season’s “Tosca” in June. Her adoring fans ate it up. The orchestra glittered in its own right with two overtures, one each from Mozart and Rossini, as well as the lush intermezzi from “Cavelleria Rusticana” and Puccini’s “Manon Lescaut.”

Gheorghiu is a consummate Puccini soprano (she will sing Mimi in “La Boheme” in San Francisco in November) and, in the first half of her program she did not disappoint. After a somewhat slow start in Giuseppe Giordani’s “Caro mi ben,” she launched into Doretta’s lied from “La Rondine” with the same aplomb that wowed audiences last year. She was wearing a white flowing gown with a gold and jeweled bodice, her dark curls tumbling about her shoulders and looked every bit as delicious as she sounded. Her only flaw was a nervous gesture of frequently brushing the hair from her left temple. While the orchestra played the Puccini intermezzo, she went backstage and changed, reappearing in a navy blue, figure-hugging number that showed off her considerable charms but made her look like a mermaid out of water. In this she sang an exquisitely nuanced “Un bel di” (“One Fine Day”) from “Madama Butterfly.” She might have been better off in a Japanese kimono. But at least she had put her hair up and stopped brushing it out of her eyes. The first half of the program ended with Verdi’s dramatic “Pace, pace mio dio” from “La Forza del Destino.” This lies in a lower register than anything that went before and Gheorghiu invested it with a great deal of the “soffrir” (suffering) to which the character repeatedly refers.

Following the intermission and the orchestra’s scintillating rendition of the overture to “La Cenerentola,” the soloist come out in still another gown, this one of slinky red satin that was cut way down to here in the back. She had plenty of opportunity to show off both sides of the dress as she sang and danced her way through a series of relatively minor songs that included that old war horse “La Filles de Cadiz” and a heavily accented “I Could Have Danced all Night” from “My Fair Lady” which she ended on a high note that Julie Andrews might only have dreamt about. Outstanding in this set was “Muzica,” a lovely art song by her countryman George Grigoriu. Back to Puccini, thank goodness, for the ever-popular “O mio babbino caro” from “Gianni Schicchi,” before ending a series of three encores with the overworked “Siboney” and Augustin Lara’s sultry “Granada.” As the soprano danced her way across the stage in her fabulous red dress, flirting with the conductor and the audience, it was obvious that she was enjoying herself tremendously with this crossover material. And she sang it well. But, for more of the Puccini that is so suited to her lush, rich tone, we will have to wait a couple of months. That’s OK because, as San Francisco audiences learned last year, Angela Gheorghiu is worth waiting for. –