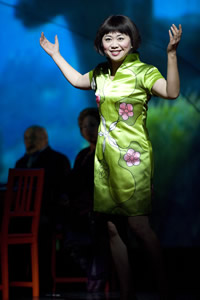 When you talk about opera, spectacle may immediately come to mind. Royalty, whether Russian, Italian, Spanish or Greek; gods and goddesses, whether Nordic, Egyptian or, once again, Greek; murder, whether intentional or not, and bloody revenge – it’s all the stuff of which grand opera is made. Then, there’s the other kind: opera about ordinary people who lead ordinary lives. The verismo works of Puccini, Charpentier’s “Louise” and Donizetti’s “Elixir of Love” tell simple, human stories in music that have a place in the operatic canon right next to “Boris Godunov” and the Wagner “Ring.”

“The Bonesetter’s Daughter” combines both aspects. The grandest of spectacles, with flying dragon-acrobats, bursts of fireworks, blaring trumpets and exquisite costuming by famed fashion designer Han Fen, it tells the most common of tales, the misunderstandings and miscommunication between mothers and daughters (and, by extension, fathers and sons). It is a ghost story that begins at a simple family dinner in a San Francisco restaurant and travels back in time to a pre-war China bound by the constrictions of tradition and class. The time-travel is seamless. As the ghost of a dead grandmother, Precious Auntie (sung by Chinese opera star Quian Yi), escorts the inhibited American writer Ruth (Shanghai-born international diva Zheng Cao) into the past life of her troubled, difficult mother LuLing Liu (Ning Liang), Ruth actually is transformed into the younger version of her mother for the trip, enabling Cao to sing both roles and bringing to life a central metaphor of the story — that what we know and what we are is buried in our very bones.

Precious Auntie, who spends a great deal of time hovering in the air, didn’t have it so easy in the old country. Reduced to slave status after being raped by the same man who killed her respected physician father (the bonesetter of the title), she later is faced with the prospect of a marriage between that same rapist, the evil coffin-maker Chang (Metropolitan opera star Hao Jiang Tiang) and the daughter she has born him, LuLing. Choosing death over such a fate, Precious Auntie becomes an unquiet ghost, who both protects her daughter and instills her with the fear that Luling, once safe in America, will pass down to Ruth.

The opera begins with a trio: the three women, three generations, singing “These are the things I know are true.” It is a lyrical introduction to what is to come. Composer Stewart Wallace (“Harvey Milk”), in a close three-year collaboration with Amy Tan, librettist and author of the book from which the opera has been distilled, has managed to write music that is Chinese, without any fake chinoiserie, and still acceptable to Western ears. The music follows the dialogue, making it easier to understand both. The closest thing to an aria is the poignant letter-writing scene in the second act, when LuLing, having fled her native village after her mother’s death, takes refuge in Hong Kong eking out a meager living by sending letters to America, pleas to immigrant husbands from abandoned wives. Some of the music is stirring and absolutely fun, like the Act One march of dead souls, culminating in the entrance of Chang, emerging out of one of his own coffins. Precious Auntie’s music is in a slightly different idiom than the rest, a little eerie, befitting her status as a spirit.

The visuals beggar description. In addition to the costumes, Walt Spangler’s arresting sets and wonderful projections (by Leigh Haas) of bubbling fountains and floating fish, fire and fireworks, atmospheric fog and clouds, beguile the eye in almost every scene. The orchestra, conducted by Steven Sloan and augmented by Chinese musicians including pop star Wu Tong, delivered the score beautifully and the singers, including James Maddalena as Ruth’s well-meaning but befuddled American Jewish husband, were first rate.

The danger lying in something that comes to the stage with as much hype as “The Bonesetter’s Daughter” which, in addition to articles in the local press, has been the subject of extensive spreads in the New York Times and Opera News, is that the reality will fall flat of the expectation. In the case of this world premiere, the opposite is true. San Francisco Opera’s production team has turned out a product that exceeds wildest hopes. Whether or not it will become a classic remains to be seen. For now, it is well worth the time and trouble that went into it.