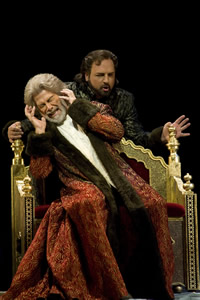 If you’re going to have hordes of peasants in an opera, you have to give them something inspiring to sing and something interesting to do. In “Boris Godunov,” Modest Mussorgsky provided the former, but San Francisco Opera, with its latest staging of this profoundly Russian work, doesn’t entirely fill the bill on the latter.

There are masses of plebeians, all right, along with patriarchs on a stage at times so sardine-packed that you can hear the boards of Göran Wassberg’s inventive unit set (superbly lit by Duane Schuler) groaning under their weight. And when they’ve finally assembled onstage and get around to singing, the auditorium of the War Memorial fairly rumbles. But for all of its pageantry, this “Boris” stumbles on a number of fronts, recovering only in the final scenes to achieve some of the brilliance Mussorgsky intended.

Composed in 1869, Mussorgsky poured his soul into this adaptation of Alexander Pushkin’s dramatic tragedy. What he came up with was a musically innovative, muscular opera at first rejected by the authorities—notably because it lacked a strong female role, but also because it tapped folk melodies and, in a distinctly modern way, used the score to delineate character and establish mood, rather than present vehicles for arias, as was common in more romantic works popular at the time. He also fudged the historic details, in accordance with Pushkin’s original.

The story the composer ultimately stitched together from both Pushkin and another scholarly tome of the period centered on Boris Godunov’s assumption of the tsar’s throne in the late sixteenth century after serving as regent—a feat he achieved by sending his agents to kill the boy Dmitri, the last remaining son of his predecessor Ivan (or so the libretto would have us believe; the historic facts are murky). This supposed crime prompts a young monk, Grigory, to seek vengeance as the Pretender Dmitri, and from Poland he mounts a force of nobles and papists to reclaim the crown. Though Boris reacts with predictable rage, vowing to defeat the pretender, he cannot suppress the hidden guilt he bears for his role in Dmitri’s death, and he becomes overwhelmed by an imagined ghost and a debilitating remorse for his complicity.

This being an epic, more characters populate the story, which Mussorgsky lays out not in acts that flow from one to the next but in a series of scenes from which audiences can deduce plot details. Nevertheless, it makes for a lot of exposition, and subsequent attempts by Mussorgsky and others (including Rimsky-Korsakov) to provide more structure or background resulted in a number of versions of the opera. For this production, SFO is relying on the so-called initial version of 1869, with a couple additions from later versions.

The first two scenes in this production are the most flaccid, offering endless parades of peasants and boyars filing onstage and off in repetitive patterns that director Julia Pevzner might have managed a bit more briskly. She also employs a hokey device, requiring the Simpleton (who figures in ominously later in the drama) to appear in many scenes not otherwise requiring his presence, mute and clutching a portable onion-domed tower, as if he represented the soul of Russia. But the staging tightens considerably beginning in scene three when, upon hearing from the historian monk Pimen of Dmitri’s demise, Grigory schemes to topple the tsar.

As Boris, Samuel Ramey appears, magisterial, at the conclusion of the second scene, wearing the tsar’s raiment as the chorus swells. But that’s it for him until the second half of the opera, when he warms up and delivers a psychologically complex tsar, simultaneously proud and guilt-ridden. Ramey brings just the right histrionic touches to the hallucination scene, showing in his writhing and dropping to the floor how athletic he remains at age 66. His instrument, however, may not be as resilient. There is at times an almost strained quality to his voice here, and the signature vibrato issues forth in a deliberate, overmeasured way, as if he were parceling out his breath, note by note. There are also times when the orchestra, under Vassily Sinaisky’s energetic baton, buries him with its volume. But at his best, Ramey still inspires, particularly as he projects over the pit during the death scene and fills even the balcony with his stirring bass.

Other fine singers join Ramey, notably Ukrainian bass Vitalij Kowaljow, whose interpretation of Pimen is awash in foreboding, and Vsevolod Grivnov, the Russian tenor who makes Grigory simmer with a passion equal to the music. As Prince Shiusky, tenor John Uhlenhopp creates a suitably oily counterpart to Boris (though he, too, suffered occasionally from an inability to enunciate over the orchestra). Mezzo-soprano Catherine Cook is an amusingly bawdy Innkeeper, and tenor Andrew Bidlack (a first-year Adler fellow with SFO) sings the Simpleton (also called the Holy Fool) with a startling clarity.

Mussorgsky meant for “Boris Godunov” to explore the tortured conscience of an omnipotent tsar, reflecting as well on the quintessentially Russian preoccupation with national identity and how it affected the country’s highly stratified classes. In the process, he created a work that demands huge outlays of talent and imagination. Though it has both, this production struggles to reach a level commensurate with the composer’s genius. But San Francisco’s attempt nevertheless deserves praise for its aspirations, especially in the moments when it indeed brings Mussorgsky’s musical epic fully to life.