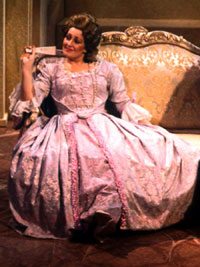 Is it the words or the music? that make the stuff of operatic dreams. Richard Strauss doesn’t answer that in his last opera Capriccio but gets some great digs in at opera posing that question. The backstage brainstorm session between divas, composers, lyricists and backers is the faux plot for the discussion of art. In AVA’s lean and lush production, director Dorothy Danner keeps this a stylized confection and knows how to keep her very funny production out of the way of Strauss’s challenging musical palette. Musically, this is a torrent of dialogue cycles and two central soliloquy that is all masterfully paced by music-director and pianist Luke Housner, the sole musical accompaniment.

Actually, Capriccio is a satire wrapped in a parody around a theatrical farce, here sung in German for a mostly American audience, no small challenge. AVA’s clever staging makes the surface inviting by opening the salon size Warden Theater’s upstage with its iron balcony and spiral staircase.

Soprano Jan Cornelius has a quiet reserve as the Countess that builds to her climatic lengthy end scene when she decides on the fate of the opera. Her diction perfect and her vocal expressiveness passionate and steely. A perfect foil is her brother Alex Lawrence, the Count, whose basso clips off their fast repartee with an infectiously playful familial chemistry.

Danner’s focuses on light ensemble comic acting anchored off the three terrific character singers- Zach Borichevsky’s velvet voice composer Flamand, Christopher Bulduc’s blue baritone lyricist Olivier and Scott Conners basso passionato Direktor- A trio of muscled vocal alchemy that just filled the hall gloriously. Cynthia Cook’s Clairon laces her diva with vamp and she and Cornelius are more than vocal matches for the men. Moving around the egos are the tuxedoed male servants who silently go about their duties until everyone leaves and they let it rip until Houser bellows from the piano to “STOP gossiping.”

There is a general consensus that the recent production of Tan Dun’s Tea wasn’t for those who liked opera to always force bloom arias, and Strauss chases a hard melodic line too in his sung dialogue. But Strauss to two key solos, by Conner- expressing his reason for being in creating art and that final scene with Cornelius, gives the necessary answer without any deaths. The post-mortem nontheless comes from those squirrelly comments from the downstairs staff, a quintet all in fine voice itself. Strauss is not for everybody but no one could miss AVA’s glowing technique in interpreting Strauss with glittering flair.